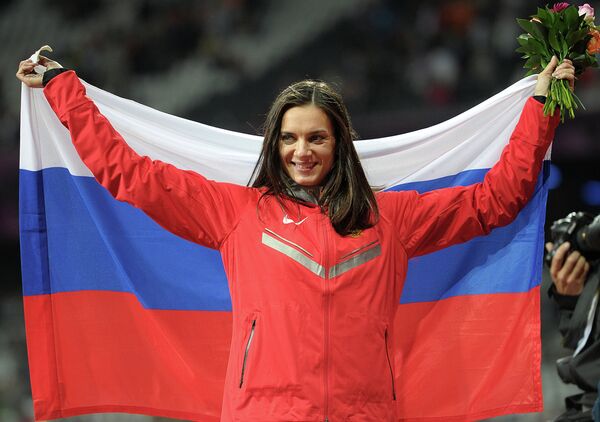 Two-time Olympic pole vault champion and world record holder Yelena Isinbayeva announced Tuesday that she would retire after the world championships in Moscow next month.

The 31-year-old made the statement immediately after winning the Russian nationals with a leap of 4 meters 75 centimeters.

“My career will finish 100 percent at the world championships,” Isinbayeva said. “For me it will be a nostalgic moment, I should get pleasure from this performance and I will try to show the best I can.”

She is competing for a seventh world gold medal next month in Moscow, where the championships will be held from August 10 through 18.

After winning bronze at last year's London Olympics, Isinbayeva said she would chase another Olympic medal in Rio de Janeiro in 2016, but first wanted to have a child.

She recounted on Tuesday a conversation she had had with her fellow pole vaulters on the topic.

"They said: 'How is this happening? You said you'd stay until Rio.' I answered: 'No, I'll be 10 years older than everyone there, so you do it yourselves. Continue my work."

Isinbayeva set her first world record in 2003 and has held the overall pole vault world record unbroken since 2004. She set the current record at a Diamond League event in Zurich in August 2009, jumping to 5 meters 6 centimeters.

Last year, she set her final record, an indoor world best of 5 meters 1 centimeter in Stockholm.

She won the Olympic Games in Athens 2004 and triumphed four years later in Beijing.

Russian Athletics Federation chief Valentin Balakhnichev told R-Sport that he would welcome Isinbayeva to join his team or even replace him as the country’s top athletics official.

“I think Lena Isinbayeva is such a great athlete that I’m eagerly waiting for her to work with us at any level,” Balakhnichev said. “If she wants to be the president, let her be the president, I will support her in this decision.”