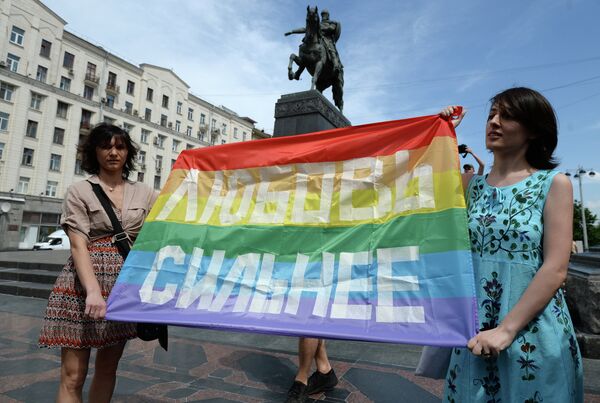 © RIA Novosti . Alexei Filippov
/
Go to the photo bank
Subscribe
Four Dutch citizens detained by police during a gay rights seminar outside the northern Russian city of Murmansk appeared in a local court Monday suspected of promoting homosexual relationships among minors, according to human rights activists and local media reports.

Investigators and migration officials reportedly detained the four, who were making a film about gay rights in Russia, on Sunday afternoon at a campsite during an event for young rights activists. The four were then questioned for about eight hours, said Tatyana Kulbakina, a representative of human rights monitoring organization OGON.

“Instead of sitting on the plane, we’re still in Murmansk,” Van der Veen wrote on Facebook on Monday afternoon. “It’s about the documentary, homosexual propaganda. It’s going alright, but it’s not clear what to do next. There has been lots of support and help from activists and the consulate.”

There was no official statement from police or investigators about the case.

The detentions are one of the first instances of the enforcement of controversial Russian legislation banning the promotion of “non-traditional relationships” toward minors. Individuals in violation of the law, which was signed by President Vladimir Putin earlier this month, can be fined up to 100,000 rubles ($3,000).

After several delays to the start of court proceedings, the hearings for the four Dutch citizens were canceled Monday, and the judge returned the case materials for further investigation, according to Kulbakina, who was present at court. “It looks like it won't go to court,” she said.

The four Dutch citizens are free to leave the country, Kulbakina added, but the material they recorded in Russia for their film was confiscated by police, and they may try to get it back.

“Leaving by car after a bizarre day in court. I believe there is no case,” Van der Veer tweeted late Monday.

The reason for the police raid on the event outside Murmansk on Sunday was not immediately clear, but the Russian LGBT Network, an NGO monitoring gay rights, and media reports suggested that the Dutch filmmakers had interviewed a minor about gay issues.

The four Dutch citizens were also each fined 3,000 rubles ($100) by migration officials for violating the terms of their visas, Kulbakina said.