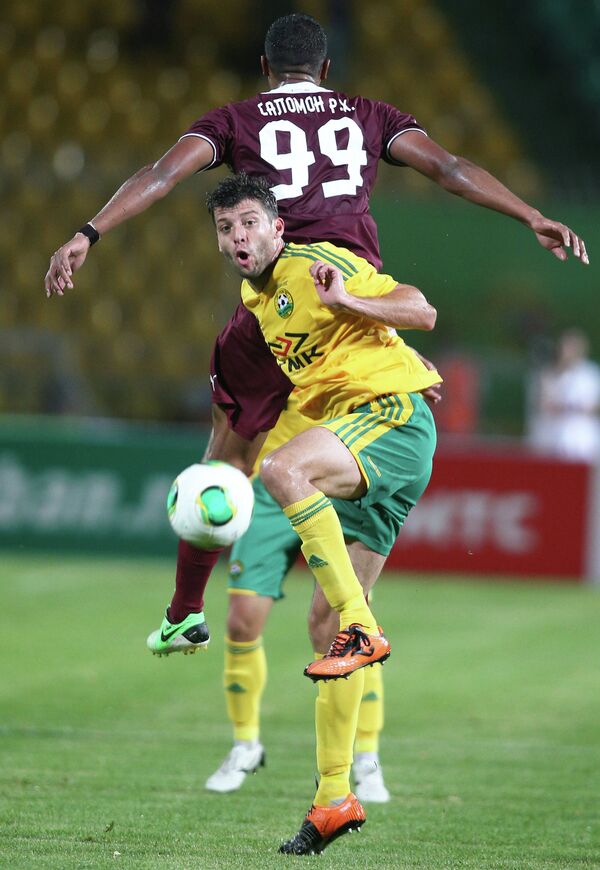 KAZAN, July 21 (R-Sport) - An injury-time header from Jose Salomon Rondon gave Rubin Kazan all three points in a 2-1 win over Zenit St. Petersburg in the Russian Premier League on Sunday.

The teams had appeared headed for a draw after Turkish winger Gokdeniz Karadeniz equalized six minutes into the second half, steering home from 12 yards out after his attempted overhead kick was blocked by Alexander Anyukov.

But the Venezuelan glanced in Oleg Kuzmin's cross to snatch victory at the death.

Zenit had taken the lead just six minutes into the first half as Alexander Bukharov stretched to lob over goalkeeper Sergei Ryzhikov and Miguel Danny helped the ball over the line.

Rubin join four teams on four points at the top of the table, while Zenit remain on three points earned with a 2-1 win over Krasnodar last week.

Only FC Rostov and Spartak Moscow have the chance to register wins in their first two games of the season, with all other teams having dropped points already.

Zapped into action by the early goal, Rubin built up a head of steam and went close themselves through a Bibras Natkho free kick.

At the other end, however, Danny should have made it two when he thumped Bukharov's header straight at Ryzhikov before the Russian striker scuffed a left-foot shot that should have at least tested the goalkeeper.

Rubin midfielder Yann M'Vila, who reportedly turned down a move to Zenit to join Rubin from Rennes in January, connected sweetly with a long-range volley but found Yury Lodygin equal to it in the Zenit goal.

A misplaced back-header from Oleg Kuzmin should have led to a second for Zenit but Bukharov passed up the opportunity, whistling his shot past Ryzhikov's right-hand post.

The second half opened with the Karadeniz equalizer, prompting Spalletti to bring on Brazil star Hulk for his first appearance of the season.

Zenit nearly went ahead immediately through Danny but the Portuguese playmaker mistimed his first-time shot from 12 yards.

Rubin substitute Alisher Dzalilov was inches away from connecting with a Roman Eremenko cross under pressure from Anatoliy Tymoshchuk, before Axel Witsel blased narrowly over from range.

The chances kept coming as the match wore on, with Lodygin pushing a Karadeniz shot just over the bar and Cristian Ansaldi's booming effort bouncing just wide.

It was Hulk's turn to squander moments later, when anything but a sidefoot straight at Ryzhikov would have sufficed. But with both teams apparently content to play out the draw, Rubin went on one final telling attack to steal the points.

In the games already played this round, Dynamo Moscow scored a controversial 2-1 win over Anzhi Makhachkala with an injury-time Andriy Voronin penalty; FC Kuban beat a spirited FC Tomsk side 2-1; and a late Roman Shishkin free-kick gave Lokomotiv Moscow a 2-1 win at FC Volga.