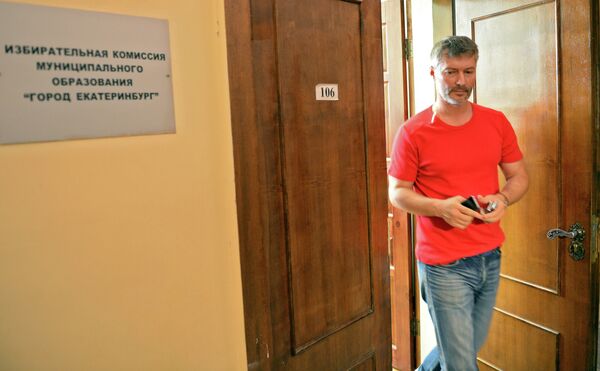 Russia’s most outspoken anti-drugs campaigner said Friday that he will run for mayor of Yekaterinburg, Russia’s fourth-largest city, whose authorities have for years been trying to close down his controversial rehabilitation center and stop his campaign against drug dealers, corrupt officials and police.

MOSCOW, July 19 (RIA Novosti) – Russia’s most outspoken anti-drugs campaigner said Friday that he will run for mayor of Yekaterinburg, Russia’s fourth-largest city, whose authorities have for years been trying to close down his controversial rehabilitation center and stop his campaign against drug dealers, corrupt officials and police.

“The decision has been made,” Yevgeny Roizman said in a tweet. Roizman said he would run for mayor as a candidate of the Civil Platform, a party founded by metals tycoon and former head of the Just Cause party Mikhail Prokhorov.

In 1999, the art historian and jewelry shop owner started what he called a "public riot" against the drug pushers who have turned the industrial Urals city of 1.3 million into one of Russia’s most heroin-blighted megalopolises. Russia is one of the world’s largest consumers of Afghan opiates according to the United Nations.

Roizman and his supporters conducted hundreds of vigilante sting operations that put dozens of drug pushers behind bars. He also founded The City Without Drugs Fund, a private rehab clinic that made headlines with its high success rates in cleaning up addicts. It also attracted less favorable media attention because of its unorthodox treatment methods that included handcuffing addicts and feeding them a meager diet in order to prevent them from leaving the clinic in search of drugs and boost their bodies' detoxification.

Roizman claims his exposure of corrupt police and officials involved with heroin dealing put him at odds with regional authorities. He claims the accusations against him and his clinic were part of a smear campaign, and that his former patients testified against him after they were pressured and “drugged” by police.

Dozens of Russian police and narcotics officers have been convicted and jailed in recent years for accepting bribes from drug dealers to ignore their crimes, or even selling drugs themselves. Last May, a narcotics officer in Yekaterinburg was sentenced to 17 years in jail for pushing heroin.

In an interview with the Znak.com news agency Friday, Roizman said he decided to run because he “had no choice.”

“People close to me are either on trial or wanted [by police],” he was quoted as saying. “We have to show them that we must be reckoned with, that this is our city.”

One of those on trial is Aksana Panova, Roizman’s partner and former head of the Ura.ru news agency, who faces up to 15 years in prison on a string of charges that include extortion, embezzlement and money laundering. Speaking at the opening of her trial on July 3, she claimed the charges were “fabricated” by the regional authorities in response to critical reports and an award-winning advertising campaign that highlighted their shortcomings.

In May, investigators opened a criminal case against Roizman’s clinic over its imprisonment of a man who claimed he was not an addict. They also alleged that another nine patients, all women, were illegally held by the clinics head and employee between 2011 and 2012.

In 2003–2007 Roizman was a lawmaker in Russia’s lower house of parliament, the State Duma.

Yekaterinburg is the administrative capital of the industrial and oil-rich Urals region that stretches from Kazakhstan to the Arctic and is responsible for almost two-thirds of Russia’s oil output.

Russia's anti-drugs czar Viktor Ivanov said last month that about 8 million Russians use drugs and almost 150,000 people are in jailed for drugs-related crimes. The UN says Russia, a nation of 142 million people, accounts for about a fifth of the world’s heroin consumption.