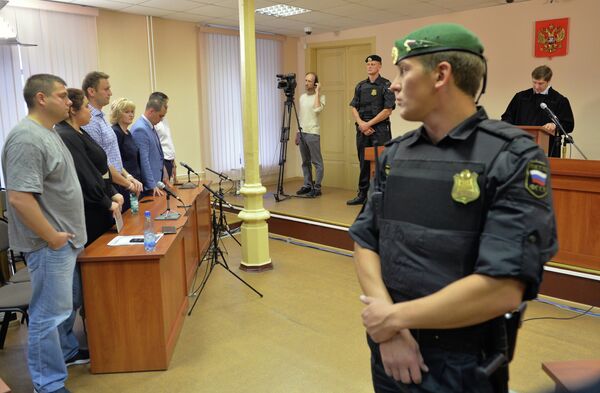 The court, in the city of Kirov, about 900 kilometers (560 miles) east of Moscow, found Navalny guilty of organizing an embezzlement scheme that cost a local state-owned company, KirovLes, some $500,000, by forcing it to sell timber at below-market prices when he served as an unpaid advisor to the Kirov Region’s governor in 2009.

Navalny, who has denounced the case as politically motivated, was cuffed by court marshals and led out of the courtroom shortly after the judge announced the sentence.

The conviction, unless overturned upon appeal, will prevent Navalny, a whistle-blowing blogger well-known for leading large-scale anti-Kremlin protests, from running for public office.

“Navalny’s guilt has been proven by the testimony of witnesses,” judge Sergei Blinov read in a monotonous voice.

In accordance with Russian court procedures, the judge had to read aloud the full verdict, which took him over three hours, while everyone in the courtroom remained standing.

During the reading, Navalny occasionally tweeted and smiled to his family and supporters. Navalny’s wife, Yulia, patiently stood behind him among the audience, resplendent in a bright red skirt and snow-white jacket.

The only co-defendant in the trial, Pyotr Ofitserov, was also found guilty and sentenced to four years in prison. A long-time acquaintance of Navalny’s, Ofitserov ran the Vyatka Timber Company and was accused of willingly buying KirovLes timber at below-market prices, thus taking part in the alleged embezzlement scheme.

The court also levied a fine of 1 million rubles (about $31,000) to be split between the two defendants.

Both men pleaded not guilty and said they plan to appeal. Navalny’s supporters have pledged to hold unsanctioned demonstrations in downtown Moscow and some 20 other cities and towns nationwide on Thursday evening.

The hearing was attended by Russian pro-opposition politicians and dozens of reporters, both Russian and foreign.

In his closing remarks earlier this month, Navalny sounded a defiant note, saying that “if anyone thinks that after these six years I will get scared and run away, they are very much mistaken.” He implied that he would continue his anti-corruption and political activities, saying he wants “to help residents of my country.”

Updated with new headline and details on sentences.