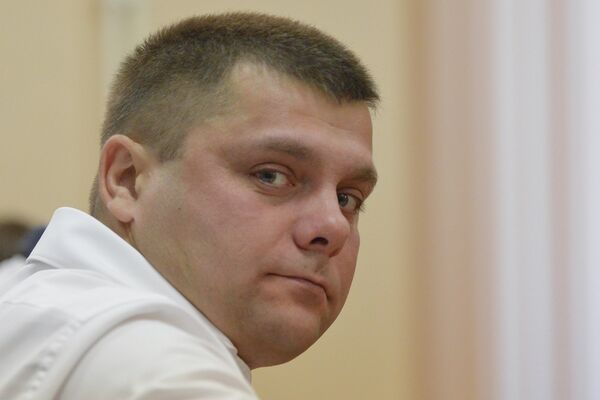 © RIA Novosti . Sergei Brovko
/
Go to the mediabank
Subscribe
International
India
Africa
This week, a little-known Russian business consultant named Pyotr Ofitserov finally took his eldest daughter on a long-promised visit to Moscow’s famed Tretyakov Gallery. They squeezed in the outing between errands on Tuesday afternoon, as Thursday Ofitserov expects to be jailed for up to five years.

MOSCOW, July 18 (Alexey Eremenko, RIA Novosti) – This week, a little-known Russian business consultant named Pyotr Ofitserov finally took his eldest daughter on a long-promised visit to Moscow’s famed Tretyakov Gallery. They squeezed in the outing between errands on Tuesday afternoon, as Thursday Ofitserov expects to be jailed for up to five years.

“It’s funny how much you get done in a situation like this,” Ofitserov, a stocky 38-year-old with a guileless face, said in an interview after the gallery visit, as calm as if he were talking about the weather.

Prosecutors say Ofitserov has cost government coffers 16 million rubles (about $500,000) by buying timber below market price in a 2009 deal orchestrated by opposition leader Alexei Navalny. A verdict in the two men’s trial, ongoing since April, is expected Thursday.

But his energy in recent weeks has not gone into a fight for justice – he waves away questions about the likelihood of a fair trial and did not plead for leniency in his closing remarks earlier this month; instead, Ofitserov, a doer by nature, seems to be preparing for the contingency he deems most likely, knowing what he knows about Russia’s justice system: a guilty verdict grounded in politics, whatever the formal charges may be.

Besides the outing with his 16-year-old, Ofitserov’s already checked at least two things off his to-do list: buying the odds and ends he’ll need in jail (based on advice found online) and choosing the limits of his cooperation with investigators.

“The investigator said to me, with a smile, ‘Just give the right testimony, and it will all be fine.’ I told him, ‘Are you nuts?’” he recalled.

“I told him, you can jail me for five years, or 10. That’s fine, I’ll live. But if I sell out Lyosha [Navalny], that will be a life sentence because I’ll have to live with it,” Ofitserov said. “He stopped smiling after that.”

The Investigative Committee did not reply Wednesday to a faxed request for comment about Ofitserov’s allegations.

A third defendant in the case, Vyacheslav Opalev, pleaded guilty, testified against Navalny and was given a four-year suspended sentence. For Ofitserov, prosecutors want a real jail term of five years – one less than for Navalny – and a fine of 1 million rubles ($31,000).

Investigative Committee spokesman Vladimir Markin said at the start of the trial that the Kirov timber case was based on criminal law, not on politics, but added that the probe had been given priority because Navalny brought on particular scrutiny by “teasing” the authorities.

Both Navalny, who was instrumental in organizing large-scale anti-Kremlin protests beginning in late 2011, and Ofitserov have called the case politically motivated and have said Ofitserov is collateral damage – a way to link Navalny to a seemingly apolitical economic crime.

“The reasons Navalny is on trial are obvious – a battle for power. I’m just an extra,” Ofitserov said at a café in downtown Moscow.

Investigators say Navalny abused his unpaid position as an advisor to the Kirov Region’s governor to force a state-run company called KirovLes to sell timber to Ofitserov at a discount and that Ofitserov willingly participated in the scheme.

Both men have noted that new chapters in the investigation, which has been opened and closed several times, and new charges have coincided with Navalny’s high-profile allegations of corruption in circles close to the Kremlin.

Ofitserov, who has been involved in commerce since the 1990s, has never been implicated in high-profile scandals of any sort and, by his account, does not seem particularly rich – living on the fringes of Moscow in a two-bedroom apartment with his in-laws, wife and five children.

He has also said Navalny was never a close friend. According to Ofitserov, the two met more than a decade ago when both were active in the liberal Yabloko party, and got on well, but the first time he visited Navalny’s home was this past summer, after both were restricted from traveling outside Moscow.

During closing remarks at the trial, Navalny was visibly choked up – for the first and only time – when he spoke of Ofitserov.

And Ofitserov does not hold Navalny responsible for his predicament.

“I just can’t do it any other way,” he said of his decision not to testify against him. “You have to do the right thing.”

As the Soviet Union began its death pangs, Ofitserov, the son of a truck driver and a primary school teacher, bounced around with his family, first from one provincial town to another and then, in 1992, to a village 300 kilometers southwest of Moscow, where his parents still live.

Interviews with those who knew him – from teachers and neighbors to relatives and clients – published in May by the Russian magazine New Times paint a portrait of someone quiet and diligent, one who was never an attention grabber but kept pushing himself to get new skills.

In the village, Ofitserov worked for a time milking cows, but manual labor, by his own admission, was not enough for him. Ofitserov holds two college degrees – including one from an agricultural institute, with a thesis on beekeeping – and first tried his hand as a small businessman in the early 1990s.

After moving to Moscow with his wife and young family, he juggled work as a real estate agent and a security guard, but gradually got more and more involved with Yabloko – inspired, in part, by the political hopefulness fomented in the late 1980s and early 1990s. 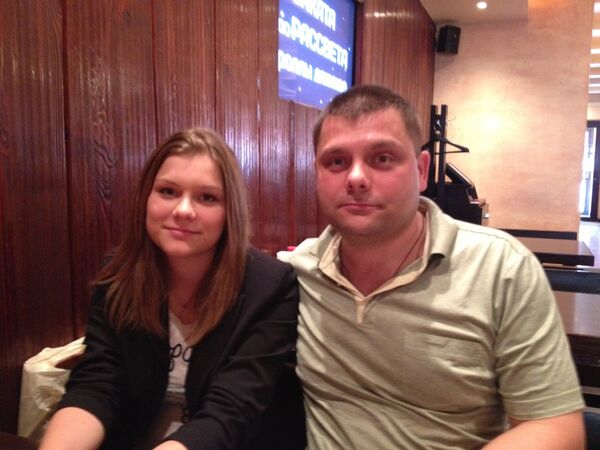 “I worked two jobs, but still, where’s the fun in that?” Ofitserov told RIA Novosti about those years. “I wanted to do something useful for the country.”

Politics “occupied all of my time,” he said, and eventually got him worried that neither he nor his kids would have a life as good as he wanted for them.

In 2003, after United Russia thrashed all its rivals in parliamentary elections, Ofitserov quietly left Yabloko, although friends tell him his eyes still light up when he talks politics.

He even admits harboring some positive feelings for President Vladimir Putin in the past, when he “saw that people really want” him, but said they dissipated after Putin returned to the Kremlin for a third term in 2012 instead of ceding power to someone new.

After Yabloko, Ofitserov worked in the consumer goods sector and quickly rose to manage a team of 60, according to a former boss interviewed by the New Times. Then he struck out as a business consultant. He has written three books on management that sell on Ozon, Russia’s biggest online book store, and his firm, Real Work Management, lists about 80 clients on its website, including some household names on the domestic market, like Mikoyan meat products and Heineken Russia. A former client interviewed by the New Times described him as an “honest, clever, meticulous professional.”

To keep his practical business skills honed, Ofitserov says, he also starts up various businesses – as with the Kirov timber trade, which he entered in the wake of the global financial crisis, when his consulting clients had put projects on hold.

Force-feeding His Family the ‘Red Pill’

“People always ask me whether I plan to go back into politics, but I say, politics has already returned to my life uninvited – and it’s done some serious damage,” Ofitserov said.

Since the trial kicked off in Kirov, he has had to travel regularly from Moscow for lengthy court sessions, which leaves little time to spend with his family.

His daughter Alyona, present at the interview, says the family is proud of Ofitserov – barring the younger children, aged two, five and seven, who don’t yet know that their father may be going on a very long trip soon.

When her father briefly leaves the table, she is less upbeat, avoiding eye contact and mumbling, in response to a request for her thoughts on the case, “What is there to think?”

Ofitserov himself struggled for words to explain his involvement with Russian politics and opposition activity, ulitmately bringing up “The Matrix,” the popular 1999 cyberpunk movie in which characters discover they are living in a fake computer-generated world.

“In Russia, it’s like in the ‘Matrix,’ where they gave you a choice,” Ofitserov said. “Take the red pill, see how things really stand, and your world comes crashing down around you. Or take the blue one, continue to ignore what’s happening, and everything’s fine.”