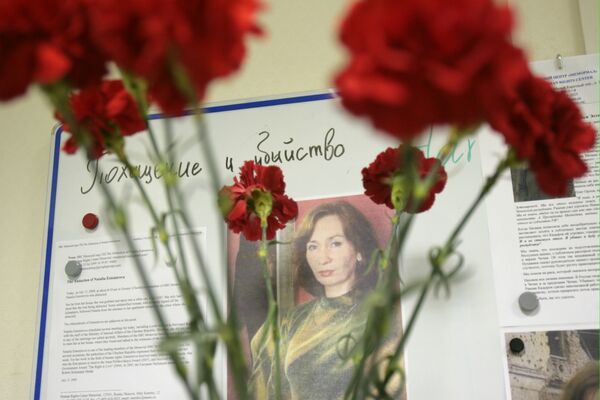 The US Department of State issued a statement on Monday in memory of journalists Natalya Estemirova and Paul Klebnikov, whose killers have never been brought to justice in Russia.

WASHINGTON, July 15 (RIA Novosti) – The US Department of State issued a statement on Monday in memory of journalists Natalya Estemirova and Paul Klebnikov, whose killers have never been brought to justice in Russia.

“We honor the memories of Ms. Estemirova and Mr. Klebnikov by calling for an end to the impunity for abuses in the North Caucasus and elsewhere in Russia,” the statement by Spokesperson Jen Psaki said.

“We urge the Russian Government to protect journalists and human rights defenders, in accordance with the international agreements to which Russia is a party,” the statement said.

Estemirova, an outspoken critic of the Chechen authorities, was abducted in the regional capital Grozny on July 15, 2009, and was later found shot dead in neighboring Ingushetia.

Klebnikov, the first editor-in-chief of the Forbes Russia magazine, was killed leaving his office in central Moscow on July 9, 2004.

Both murders, which remain unsolved, have caused an international and domestic outcry and highlighted the dangers faced by journalists and rights workers in Russia.

Russia is one of the most dangerous countries in the world for journalists, with 55 confirmed assassinations of media employees since 1992, according to international monitoring body Committee to Protect Journalists.

Many of the reporters and editors murdered in Russia have been killed in the troubled North Caucasus, which is plagued by a continuing low-level Islamist insurgency, high levels of organized crime and endemic corruption.

In the most recent journalist murder case, Akhmednabi Akhmednabiev, an editor at local newspaper “Novoe Delo,” was gunned down in front of his house in the volatile North Caucasus Republic of Dagestan on July 9.