3,000 People Rally in Support of Arrested Mayor in Yaroslavl 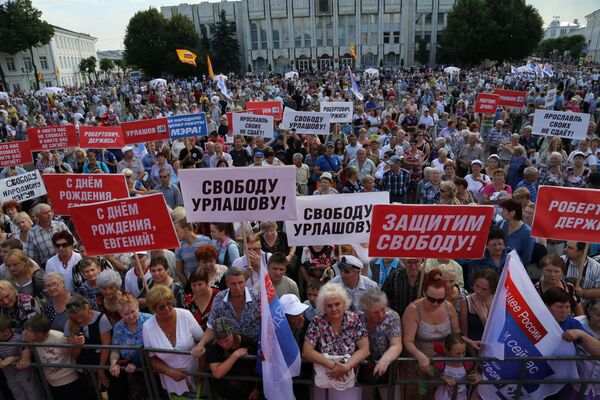 YAROSLAVL, July 16 (RIA Novosti) – About 3,000 people took part in a rally in Yaroslavl on Tuesday to show their support for Mayor Yevgeny Urlashov, arrested on corruption charges last Friday.

The event was organized by Yaroslavl political activists, most of them from the Civil Platform party, which supported Urlashov during last year’s mayoral election.

The rally is now over, and people are leaving the area. No major incidents were reported during the event, sanctioned by the city authorities, said a spokesman for the regional police department, Alexander Shikhanov.

Urlashov, who won the mayorship in a rare landslide victory against the ruling United Russia party last year, was charged along with four of his colleagues last Thursday with extorting a 45 million ruble ($1.4 million) bribe, investigators said. The following day, a court ruled to arrest him.

Recently, another criminal case was launched against the opposition politician. Investigators suspect him of accepting a bribe of 500,000 rubles (over $15,000) from a businessman.