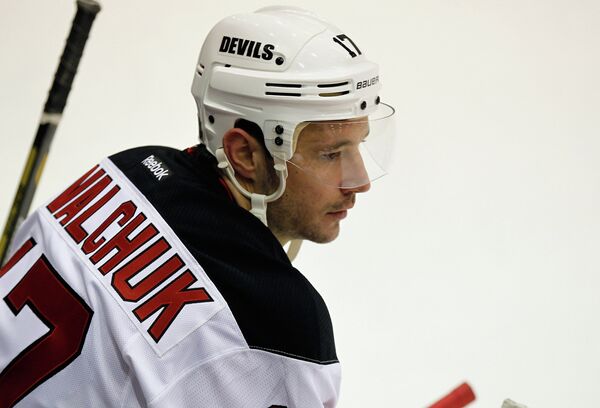 Ilya Kovalchuk, who shocked the hockey world last Thursday by abruptly retiring from the New Jersey Devils, has signed a four-year deal with SKA St. Petersburg, making him the first major Russian hockey star in his prime to defect from the NHL to the KHL.

CORRECTION: This story has been changed to correct the figures pertaining to Kovalchuk's contract with the Devils.

MOSCOW, July 15 (R-Sport) – Ilya Kovalchuk, who shocked the hockey world last Thursday by abruptly retiring from the New Jersey Devils, has signed a four-year deal with SKA St. Petersburg, making him the first major Russian hockey star in his prime to defect from the NHL to the KHL.

The deal, announced by the club on Monday, signals a coup that Russian hockey officials have been fighting for since the mid-1990s, when a wave of players left for North America, depleting a proud hockey nation of its prized talent.

"We're a team but as we know, the role of the individual in history is large so the main effort of the club this offseason was directed at Ilya Kovalchuk, one of the stars of the hockey world," SKA president Gennady Timchenko said in a statement released by the team.

"Ilya has already proven he's a true leader on the ice and off."

Since its founding five years ago, the KHL, an eight-country league stretching from Croatia to Kazakhstan to the Russian Far East that sees itself as a direct competitor to its North American counterpart, has tried, and failed, to lure back Russian stars such as Alexander Ovechkin, Evgeni Malkin and, most recently, Vezina-winning goaltender Sergei Bobrovsky.

Now in Kovalchuk, the league immediately has a new face and its most marketable star – perfectly timed as Russia prepares to host the Winter Olympics in Sochi next February. It now seems inevitable the 30-year-old wing will captain the struggling national team as it looks to rebound from a dismal sixth-place finish at the world championship in Finland and Sweden earlier this year.

"With Ilya Kovalchuk, one of the leaders of the Russian national team, [Russia] will be able to better prepare for this important tournament," Timchenko said. "The national team coaches will also be able to conveniently watch him play, not just on TV but live."

The Russians also finished sixth at the Vancouver Olympics four years ago.

While the Tver native played 36 games for SKA during the NHL lockout last season, his choice is unsurprising for other reasons. A perennial Gagarin Cup contender, SKA is financed by Gazprom, whose deputy chairman Alexander Medvedev is also KHL president.

With what is believed to be the richest contract in KHL history, and the backing of KHL brass, Kovalchuk seems likely to play a central role in the league's ceaseless efforts to broaden its pan-European scope. On name alone, he can undoubtedly take the league farther afield than its current crop of Russian stars led by former Nashville Predators forward Alexander Radulov.

Meanwhile, Kovalchuk walks away from a massive 15-year, $100 million contract he signed with New Jersey in 2010. He would have made $77 million over the next 12 years.

In the KHL, 37 players were paid more than 60 million rubles (about $1.8 million) last season, including six on SKA, according to league figures. SKA was roughly $3 million under the salary cap last season, which is increasing from about $35 million to $37 million in 2013-2014. League officials have said cap exceptions would be granted in certain circumstances.

On Sunday, Russian media reported Kovalchuk's sister as saying her brother already has plans to return to the NHL. According to league rules, when Kovalchuk turns 35, five years from now, he comes off the NHL's voluntary retired list and becomes an unrestricted free agent, meaning he can sign with any team. If he wanted to return next season, for instance, he would need approval from the Devils.

During the lockout, Kovalchuk broached the idea of staying in Russia with Devils general manager Lou Lamoriello, but let the matter rest once the season started.

"This decision was something I have thought about for a long time going back to the lockout and spending the year in Russia," Kovalchuk said in a statement Thursday. "Though I decided to return this past season, Lou was aware of my desire to go back home and have my family there with me. The most difficult thing for me is to leave the New Jersey Devils, a great organization that I have a lot of respect for, and our fans have been great to me."

An 11-year NHL veteran, Kovalchuk retired with 417 goals and 399 assists in 816 games with the Devils and Atlanta Thrashers, who made him the league's first Russian No. 1 overall pick in 2001.