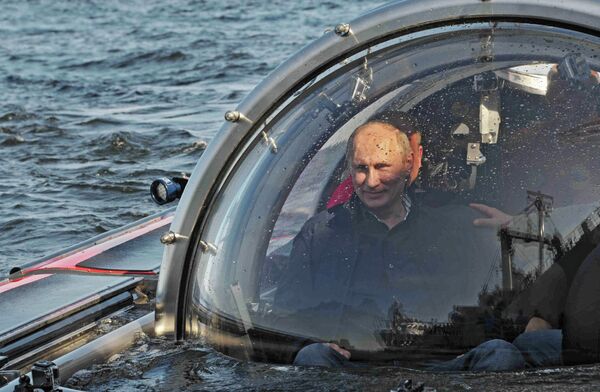 The half-hour journey to the Oleg, a prized steam frigate in Tsar Alexander II’s Navy, was a highlight of the president’s trip to this island in the northwestern Leningrad Region to learn about underwater research projects by the Russian Geographical Society. Putin is chairman of the organization’s board of trustees.

The president submerged within the clear-paneled, five-seat C-Explorer-5 submarine, which luxury retail site RichVibe touts as the “world’s first subsea limousine” with a price tag of $2.4 million.

Speaking about his experience, the president said it was different from other dives he had been on, including his four-hour trek in the Mir-1 minisub in 2009.

"This submersible is different, impressions are also a bit different,” Putin said, adding that the underwater vehicle was equipped with thick hemispherical glass, so the picture is slightly distorted. “Very interesting. Impressive. … It’s like a time machine taking you to another period.”

Putin said he saw gun ports and a part of the hull bearing the ship’s name.

“[The Oleg] is lying on its right side. Indeed, [its] condition is good, and the ship’s name is clearly visible. [It] is very well-preserved,” he told journalists after completing his dive.

The Oleg sank 60 meters below the surface of the Gulf of Finland after being rammed by an ironclad during a naval exercise. It descended to the seafloor in just 12 minutes, and its interior and weapons remain mostly intact.

It was found by an underwater research team led by Roman Prokhorov and Igor Galaida in 2003. Ten years later, the researchers received a grant from the Russian Geographical Society to study the ship’s wreckage. More dives are planned to study the ship, but researchers are almost sure that it cannot be retrieved: The Oleg’s load-bearing walls are almost completely destroyed and the vessel might fall apart during the procedure.

On land, the president was shown near-intact porcelain tableware that divers had recently salvaged.

Another ship to be studied under the 2013-2018 underwater research program of the Russian Geographical Society is the Lefort, an Imperial Russian navy ship whose sinking in 1857 remained the worst Baltic Sea disaster for almost 140 years.

“The Baltic seabed is a museum of sunken ships. The Lefort and the Oleg are its main exhibits,” diver Roman Prokhorov told the Russian president.

The Lefort was found by a group of Russian divers searching for sunken World War II submarines in early May. The vessel capsized and sank in rough water on September 23, 1857, while en route from Reval (present-day Tallinn, Estonia) to Kronstadt, killing all 826 people aboard, including 53 women and 17 children.

Arthur Chilingarov, first vice president of the Russian Geographical Society, said they planned to search for other wrecks, including the Alexander Sibiryakov icebreaker, which was sunk by a German ship during World War II.

Known for a keen interest in exotic adventures, Russia’s leader in August 2011 scuba-dived in the Kerch Strait, which links the Black and Azov seas, and came up with two ceramic jugs dating to the sixth century.

His press secretary later admitted that the urns had been discovered earlier by archaeologists and placed there for Putin to find.

In 2009, Putin took the Russian Mir-1 minisub to the bottom of Lake Baikal, the world’s largest freshwater lake, to check for reported pollution from a paper factory. He soon allowed the factory to reopen.