Subscribe
Fugitive US intelligence contractor Edward Snowden said Friday that he plans to ask Russia for temporary asylum “today,” in hopes of eventual safe passage to Latin America, and asked about a dozen prominent Russian lawyers and rights activists to support his request.

MOSCOW, July 12 (RIA Novosti) – Fugitive US intelligence contractor Edward Snowden said Friday that he plans to ask Russia for temporary asylum “today,” in hopes of eventual safe passage to Latin America, and asked about a dozen prominent Russian lawyers and rights activists to support his request.

Snowden’s statement came during his first public appearance since arriving from Hong Kong on a June 23 flight to Moscow and was retold by those who met with him, and also posted online by Wikileaks, the controversial free-speech organization that has been his advocate in recent weeks.

“I ask for your assistance in requesting guarantees of safe passage from the relevant nations in securing my travel to Latin America, as well as requesting asylum in Russia until such time as … my legal travel is permitted,” Snowden said in the statement posted on Wikileaks’ website. “I will be submitting my request to Russia today, and hope it will be accepted favorably.”

Russian President Vladimir Putin said last month that Moscow had offered Snowden asylum under the condition that he stop his work aimed at “damaging our American partners,” an option Snowden reportedly rejected. 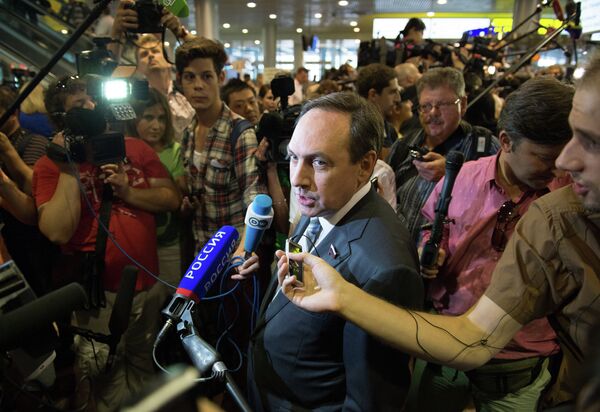 After Friday’s closed meeting – which took place at Moscow’s Sheremetyevo airport, where Snowden is believed to have been holed up since his arrival – pro-Kremlin lawmaker Vyacheslav Nikonov told reporters that Snowden said he is now ready to accept Russia's terms.

He added that Snowden said he sees "no other choice."

Another meeting attendee, Tatyana Lokshina of Human Rights Watch, quoted Snowden as saying, "No actions I take or plan are meant to harm the US," according to an earlier tweet from New York Times reporter Ellen Barry.

No comments to this effect were included in Snowden’s official statement. But Nikonov also told reporters that Snowden said "he does not intend to do damage to the USA."

While Putin has said that Moscow will not extradite Snowden to the United States, where he could face the death penalty, the Kremlin has also tried to keep its distance from the case, emphasizing that it is a human rights issue.

Russian officials did not immediately confirm whether a formal asylum request had yet been filed. 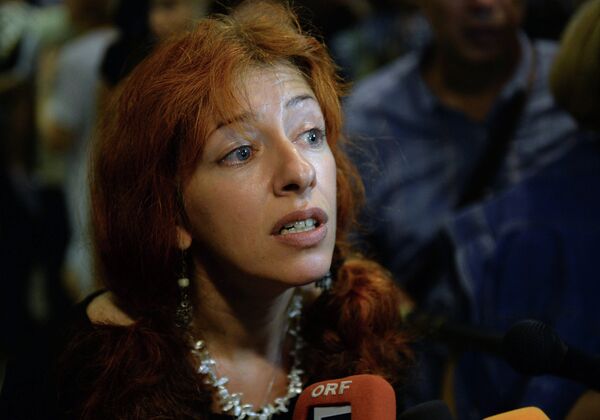 However, a number of Kremlin loyalists quickly said they would support the bid – thereby giving the impression that it would be accepted. In interviews broadcast by Rossiya 24 state-run television, the speakers of both houses of Russia’s parliament – neither of whom attended the Sheremetyevo meeting – voiced their support for the asylum request, as did lawyer Anatoly Kucherena, a member of Russia’s advisory Public Chamber, who did meet with Snowden.

Snowden has submitted over 20 asylum applications to countries across the world, but Latin American states, including Bolivia, Nicaragua and Venezuela, have been the only ones prepared to offer him refuge. None of them, however, has been willing to grant him asylum while he is not on their territory.

Updated throughout with statements from Snowden and those who attended the meeting, as well as the Kremlin and affiliated officials.

000000
Newsfeed
0
New firstOld first
loader
LIVE
Заголовок открываемого материала
Access to the chat has been blocked for violating the rules . You will be able to participate again through:∞. If you do not agree with the blocking, please use the feedback form
The discussion is closed. You can participate in the discussion within 24 hours after the publication of the article.
To participate in the discussion
log in or register
loader
Chats
Заголовок открываемого материала
Worldwide
InternationalEnglishEnglishMundoEspañolSpanish
Europe
DeutschlandDeutschGermanFranceFrançaisFrenchΕλλάδαΕλληνικάGreekItaliaItalianoItalianČeská republikaČeštinaCzechPolskaPolskiPolishСрбиjаСрпскиSerbianLatvijaLatviešuLatvianLietuvaLietuviųLithuanianMoldovaMoldoveneascăMoldavianБеларусьБеларускiBelarusian
Transcaucasia
ԱրմենիաՀայերենArmenianАҧсныАҧсышәалаAbkhazХуссар ИрыстонИронауОssetianსაქართველოქართულიGeorgianAzərbaycanАzərbaycancaAzerbaijani
Middle East
Sputnik عربيArabicArabicTürkiyeTürkçeTurkishSputnik ایرانPersianPersianSputnik افغانستانDariDari
Central Asia
ҚазақстанҚазақ тіліKazakhКыргызстанКыргызчаKyrgyzOʻzbekistonЎзбекчаUzbekТоҷикистонТоҷикӣTajik
East & Southeast Asia
Việt NamTiếng ViệtVietnamese日本日本語Japanese中国中文Chinese
South America
BrasilPortuguêsPortuguese
NewsfeedBreaking
17:27 GMTHunter Biden Received 3-Carat Diamond on Top of $10M a Year Deal With Chinese Businessman, Book Says
17:17 GMTWill the Maxwell Trial Expose Epstein's Rich & Powerful Friends or Turn Into Another Cover-Up?
17:12 GMTSouth Africa's Health Minister Unhappy With International Reaction to Omicron Strain
16:32 GMTKremlin: Anti-Russian Campaign Could Be Used to Distract From Kiev’s Planned Military Op in Donbass
16:11 GMTGermany Warns US Congress Nord Stream 2 Sanctions Will 'Damage Transatlantic Unity', Docs Show
15:54 GMTPrince Harry Lashed Out at Prince William Who Asked Him Not to Rush Things With Meghan, Book Claims
15:45 GMTPoland Ready to Help Finance Return of Migrants Stuck at Border With Belarus to Home Countries
15:05 GMTTwo Iranian Seamen 'in Good Health' After Being Rescued by US Navy Ship in Gulf
14:51 GMTThe Omicron Strain: What is Known About New COVID-19 'Variant of Concern'
14:47 GMTAustrian Chancellor Speaks for Proceeding With Nord Stream 2 Pipeline Project
14:43 GMTKyrgyz Lawmaker Detained on Suspicion of Plotting a Coup - Source
14:19 GMTBiden's Attempt at Sending Message of Return to Normalcy Thwarted by New COVID Variant
14:00 GMTMacron Bashed for 'Throwing Toys Out of Pram' as Patel Uninvited to EU Talks on Channel Crossings
13:47 GMT'Leaked' Ballon d'Or Result Confirms Lionel Messi as Winner, But Dutch Pundit Blasts PSG Forward
13:40 GMTUK Royal Air Force Accused of 'Woke B***hery' After It Ditches Airwomen and Airmen for Aviators
12:57 GMTOpposition Slams Indian PM as Modi Skips All-Party Meeting a Day Before Winter Session of Parliament
12:45 GMTIranian Nuclear Chief: Israel Should Check Its Capabilities Before Threatening to Attack Tehran
12:13 GMTStorm Arwen: Third Person Dies in UK, 240,000 Residents Left With No Power in England
11:19 GMT'Asleep at the Wheel': UK Bashed as China Has Pumped $900 Bln Into Commonwealth Nations Since 2005
11:15 GMTSolomon Islands Prime Minister Refuses to Resign Over Riots, Vows to Find 'Instigators' of Unrest