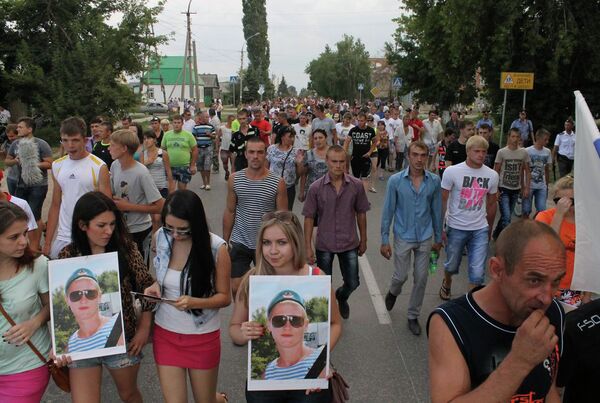 © RIA Novosti . Sergei Fedotov
/
Go to the photo bank
Subscribe
A senior investigator said Friday that 13 men, all ethnic Chechens, had been detained outside the small Russian town of Pugachyov, where a fatal stabbing has triggered nearly a week of angry anti-migrant protests.

SARATOV, July 12 (RIA Novosti) – A senior investigator said Friday that 13 men, all ethnic Chechens, had been detained outside the small Russian town of Pugachyov, where a fatal stabbing has triggered nearly a week of angry anti-migrant protests.

One of the detained men, a 20-year-old cousin of the suspected stabber, was shot in the leg when he threatened an officer with a pitchfork, said Sergei Sedov, deputy chief investigator for the region, Saratov, about 800 kilometers (500 miles) southeast of Moscow.

The officers had approached the residence to check documents, Sedov said, adding that the pitchfork-wielder, identified as Ali Khaidayev, received first aid at the scene, in the village of Anin Verkh.

Khaidayev was not suspected in the earlier stabbing death because he had arrived in the region “to support his relatives” only two days before he was detained, Sedov said.

The 13 men were detained for failing to properly register with the migration service, Sedov said, adding that they were not considered suspects in the stabbing case. It was unclear whether Khaidayev would face further charges.

In a bid to cool interethnic tensions in Pugachyov, population 40,000, authorities and community leaders have introduced a liquor ban until July 19, sent out “radical” young people, and were reportedly trying to keep non-local nationalists at bay.

In at least five consecutive days of rallies, hundreds of residents have called for ethnic Chechens to be cast out of the town. The regional police department has dismissed the town’s police chief, Igor Lopatkin, and launched an investigation into “his activities.”

In the early hours of Sunday morning, a Chechen teenager fatally stabbed a 20-year-old former paratrooper outside a local cafe in a fight over a girl, prosecutors said.

Some media reports have identified the ethnicity of the blond-haired victim, Ruslan Marzhanov, as half Russian, half Tatar. The 16-year-old suspect, whose name has not been released, was promptly detained and confessed to the killing, prosecutors said.