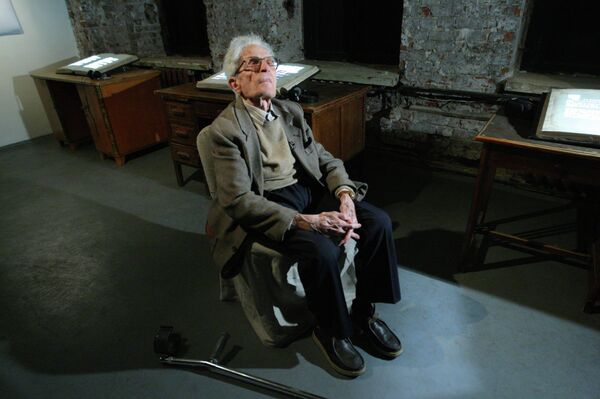 His father was executed on Josef Stalin’s orders, his mother committed suicide in jail, and he survived 13 years in the Gulag – to become one of the most outspoken critics of Stalinism.

MOSCOW, July 11 (RIA Novosti) – His father was executed on Josef Stalin’s orders, his mother committed suicide in jail, and he survived 13 years in the Gulag – to become one of the most outspoken critics of Stalinism.

Anton Antonov-Ovseyenko wrote several seminal books denouncing the Soviet tyrant, his henchmen and the political system that devastated Russia and doomed millions to exile, disgrace, prison or death. Even blindness, exacerbated by merciless prison conditions, did not stop him from writing and running the Moscow branch of the Union of Victims of Political Purges.

Yet Antonov-Ovseyenko was best known as the founder and president of the Gulag History Museum in Moscow, where a modest memorial service was due to be held Thursday, two days after his death.

He died Tuesday at the age of 93 – having outlived the Communist system his father helped create and witnessed the sweeping and chaotic changes in post-Soviet Russia. But his twilight years coincided with attempts to whitewash Stalin's legacy and political system that Antonov-Ovseyenko described and denounced in his books.

“The sad thing is that now there is a new wave of reviving the cult of Stalin, of worshipping him,” he told Radio Liberty in 2005. “There is a new Stalinization.”

In February, almost half of all Russians said that Stalin played a “very positive” or “quite positive” role in the nation’s history, according to a poll by the independent Levada Center. Scholars, politicians and bloggers have debated recent history textbooks and Stalin biographies that either denounce his atrocities or praise him as an “effective manager” who helped crush the Nazis and turned Soviet Russia into an industrial superpower with a nuclear arsenal.

In 2008, Stalin was ranked third in an online vote organized by a Russian television channel for a show on the greatest Russians in history – and a poetic line from the 1940s Soviet anthem mentioning Stalin was recently restored to a metro station in central Moscow.

Antonov-Ovseyenko described Stalin as a common criminal – a claim he said his own experiences as a Gulag prisoner, historian and son of a Communist leader meant he was entirely qualified to make.

He was born in 1920, the son of Vladimir Antonov-Ovseyenko, a revolutionary who organized some of the key events of the 1917 Bolshevik Revolution. The Red Army commander fiercely objected to the rise of Stalin within the Communist Party ranks and sided with Stalin’s archenemy, Leon Trotsky.

When Anton was nine years old, his mother was arrested and sentenced to jail. The year was 1929 – the year of Trotsky’s deportation from the Soviet Union. She committed suicide seven years later. Her husband publicly rejected his Trotskyist affiliations and served as a justice minister and a consul to Spain.

However, he was executed in 1938, after being arrested at the peak of the Great Purge of 1936-1939 that decimated the Communist ranks, resulting in at least 700,000 death sentences – about 1,000 executions a day – according to declassified KGB archives. Millions more were exiled and jailed.

Antonov-Ovseyenko, who studied history and began working at art museums, was branded the son of an “enemy of the people” and was arrested and sentenced to imprisonment three times. He spent 13 years in five Gulag camps, and was eventually released in 1953, shortly after Stalin’s death.

While working unremarkable day jobs, Antonov-Ovseyenko gradually collected data and interviews with purged Communists in order to write “The Time of Stalin: Portrait of Tyranny,” a book that was published in the West in 1981 and nearly got him jailed again back home. In 1984, he came under pressure yet again for “anti-Soviet propaganda.”

Despite almost completely having lost his eyesight, Antonov-Ovseyenko penned several more books that cemented his reputation as a leading expert on Stalinism.

In 2001, Antonov-Ovseyenko founded the Gulag History Museum in central Moscow, which features models of prison cells and a watchtower, as well as a gallery of art depicting prison life and personal items of former convicts. It also holds exhibitions, seminars and theater performances on topics ranging from mass deportations of entire ethnic groups to the persecution of the Russian Orthodox clergy under Communists.

In one of his last interviews, he deplored the decades of Stalinist “degeneracy” that will hinder Russia’s development for years to come.

“I look to the future with cautious optimism,” he told the Rossiiskiye Vesti weekly in March 2012. “It will take more than a generation to revive a nation gripped by physical and spiritual degeneracy.”