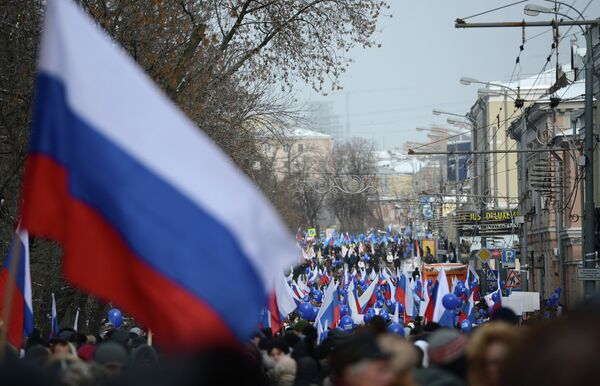 © RIA Novosti . Alexei Filippov
/
Go to the photo bank
Subscribe
Many more Russians approve of politicians labeled as “patriots” than they do “liberals,” “conservatives” or even “nationalists,” according to a state survey published Wednesday.

MOSCOW, July 10 (RIA Novosti) – Many more Russians approve of politicians labeled as “patriots” than they do “liberals,” “conservatives” or even “nationalists,” according to a state survey published Wednesday.

Some 59 percent said they approve of “reformers,” a figure that has shown a sizable increase from the 35 percent reported in 1991, just after the breakup of the Soviet Union.

A similar 54 percent praised “democrats.” (However, there was no data available for comparison from previous years.)

While a plurality of respondents disapproved of “liberals,” “nationalists” and “conservatives,” those categories are nevertheless gaining support.

“Nationalist” politicians have become more popular in recent years, jumping from 3 percent approval in 1991 to 9 percent last year, and 14 percent this year.

Approval for “conservatives” has risen from 5 percent in 1991 and 19 percent last year, to 21 percent this year.

“Liberals,” with 26 percent approval, are almost twice as popular as they were in 1991.

"Radicals,” however, now have slightly less support, with 14 percent approval this year as opposed to 17 percent in 1991.

The survey, conducted in April, culled answers from 1,600 people, representing 130 towns and cities across 42 regions. The margin of error was reported as being no higher than 3.4 percent.