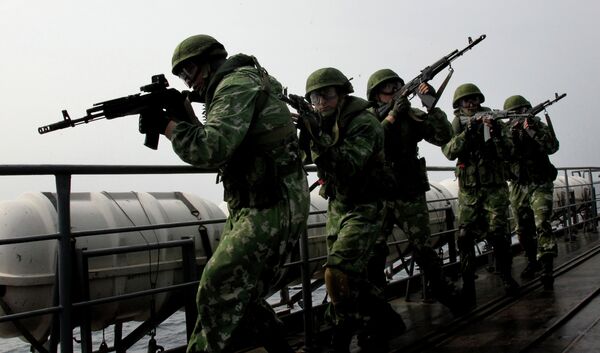 The Naval Interaction 2013 exercise, in which 4,000 servicemen participated, came in the wake of US-Japanese war games held last month near San Diego, California.

Tensions at sea have increased between Tokyo and Beijing since last year over ownership of disputed islands in the South China Sea.

Shortly before the Chinese-Russian exercise, the deputy commander-in-chief of the Chinese navy, Vice Admiral Ding Yiping, said the drills were not targeted at any third parties but were aimed at improving the two states’ anti-piracy cooperation.

The active phase of the exercise, July 8 to 10, included rescuing a hijacked ship, escorting commercial vessels, and defending a convoy from air and sea attacks.

The exercise ended with a parade of warships from the two countries in the Peter the Great Bay, Captain First Rank Roman Martov said Wednesday.

Russia and China have been conducting joint naval exercises on a regular basis since 2005. Moscow and Beijing have recently vowed to strengthen military cooperation to ensure an adequate and prompt response to common threats.