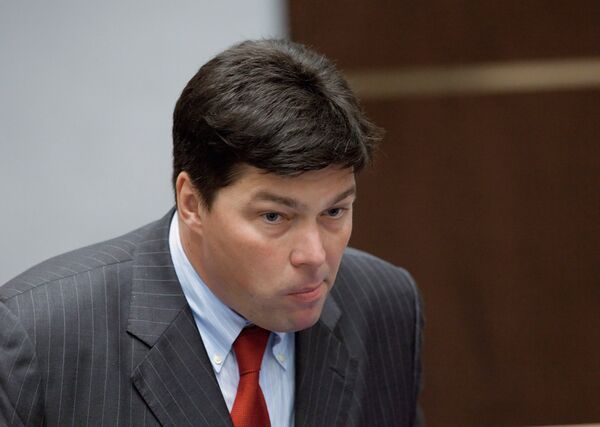 © RIA Novosti . Ilya Pitalev
/
Go to the photo bank
Subscribe
A member of Russia’s upper house of parliament and chair of its international affairs committee on Monday deplored what he described as tolerance for neo-Nazism in Estonia and accused the country’s political elites of encouraging it.

MOSCOW, July 8 (RIA Novosti) – A member of Russia’s upper house of parliament and chair of its international affairs committee on Monday deplored what he described as tolerance for neo-Nazism in Estonia and accused the country’s political elites of encouraging it.

“Neo-Nazism is an everyday phenomenon in Estonia. And it is supported by particular elements in power that even display open sympathy for the Nazis,” Federation Council member Mikhail Margelov said.

Margelov referred specifically to a message sent by Estonia’s Defense Minister Urmas Reinsalu to a gathering of the Estonian Freedom Fighter Union, a group representing people who fought against what Tallinn calls “occupational regimes,” including Soviet forces, sometimes alongside Nazi troops.

According to a statement posted on the Estonian Defense Ministry website on July 6, Reinsalu praised those who “kept the ideals of liberty alive during the difficult occupation years” and noted that “Estonia has repeatedly and unequivocally condemned the repressive policies of the Soviet Union and National Socialist Germany.”

Margelov, however, accused the Estonian defense minister of “glorifying the SS,” the Nazi military force responsible for many crimes against humanity during WWII, because Reinsalu also justified those who fought in the “resistance … wearing a foreign uniform.”

Friction between Moscow and the three Baltic states over the history of WWII has ground on since before the Soviet collapse, with many in Estonia, Latvia and Lithuania viewing Soviet rule as an illegal occupation, while Russia presents its 50-year control of these countries as legitimate.

In the two decades since the Baltics’ restored independence, some local WWII-era partisan movements, including those that fought on the side of the Nazi SS, have been honored in their home countries – traditionally to the outrage of Russian officials.

Margelov also accused the European Union, of which Estonia is a member, of overlooking what he called the country’s pro-Nazi trends and urged the EU to reconsider its approach: Unless they are dealt with, he said, these tendencies could see “midget Third Reichs” develop within Europe.

Neo-Nazi ideology and radical right-wing groups have also enjoyed varying levels of popular support within Russia since the Soviet collapse. The Russian parliament is currently set to consider a bill that outlaws attempts to “rehabilitate” Nazism and also any criticism of the Soviet Red Army’s actions during WWII.

A Russian-drafted resolution against the glorification of Nazism was adopted by the UN General Assembly in late 2012. The United States was one of three countries to vote against it, while the Baltic States were among the 54 nations that abstained.