Billionaire Prokhorov Says His Party Not in Moscow Governor Race 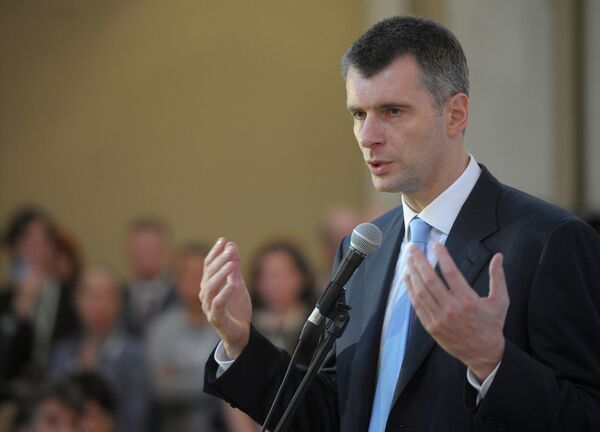 Prokhorov, who owns the Brooklyn Nets basketball team and is worth an estimated $14 billion, reportedly did not give a reason for his party's decision to not contend for the Moscow governorship. Earlier he said his party had three candidates that could run in the September 8 election.

Last month he told RIA Novosti that his party would also not field a candidate for mayor of Russia’s capital city, adding that his faction would instead focus on seats in the local municipal legislature, the Moscow City Duma.

A member of Prokhorov’s Civil Platform party, the mayor of Yaroslavl, a city 160 miles (250 kilometers) northeast of Moscow, was last week charged with extorting a 14 million ruble ($420,000) bribe from a local businessman whose firm had clinched a city contract to provide custodial services.

The announcement of the charge came soon after the mayor, Yevgeny Urlashov, who won his post in a rare landslide victory against the ruling United Russia party last year, said he would top Civic Platform's list of candidates in upcoming regional parliamentary elections.

Prokhorov, who made his fortune in metals, banking and an array of investments, ran against Vladimir Putin in Russia’s presidential election last year, garnering 8 percent of the vote. However, new legislation now prohibits Prokhorov from running for office in Russia because he owns assets abroad.