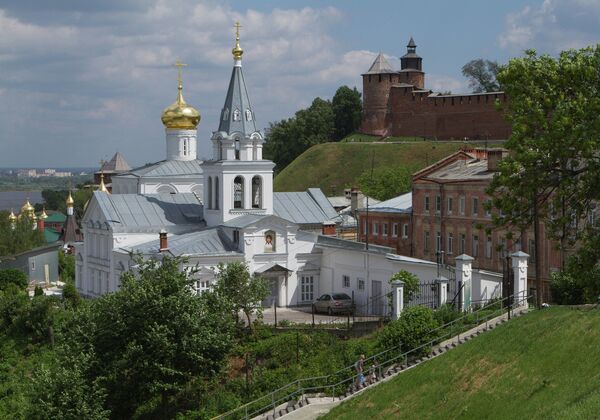 © RIA Novosti . Oleg Zoloto
/
Go to the photo bank
Subscribe
Two followers of a Russian leftist leader are accused of torching a church in the city of Nizhny Novgorod in protest against a recent pro-church law, regional police said Saturday.

MOSCOW, July 6 (RIA Novosti) – Two followers of a Russian leftist leader are accused of torching a church in the city of Nizhny Novgorod in protest against a recent pro-church law, regional police said Saturday.

The duo pelted an Orthodox Christian church in the city in central Russia with a Molotov cocktail last week, police said on their website.

However, the Molotov cocktail only burned one window sill, reports said earlier.

The attackers were members of the unregistered Left Front, a political vehicle for firebrand leftist leader Sergei Udaltsov, police said, without providing their names.

The suspects said they were protesting against last month’s law that introduces punishments for offending “religious believers’ feelings.”

The opposition claimed the bill was infringing on non-believers’ rights and linked it to the church’s ideological alliance with President Vladimir Putin, whose presidency bid was endorsed last year by church head Patriarch Kirill.

The city’s branch of the Left Front identified one of the suspects as group member Dmitry Kapelyush and confirmed that he pleaded guilty.

“We do not support such attacks…and regret that we failed to explain it to our comrade,” the group said on its page on social network Vk.com.

Kapelyush claimed earlier that city police have repeatedly threatened to fabricate a case against him, opposition website Kasparov.ru said Saturday.

The church has not commented on the case. Last year, it supported criminal persecution of three opposition minded member punk band Pussy Riot who performed an anti-Putin song in a cathedral and were jailed for two years each.

Puzzlingly, the Left Front activists were not accused of violating the law they were protesting against: Police only charged them with deliberate damage of property, not offending churchgoers’ feelings.