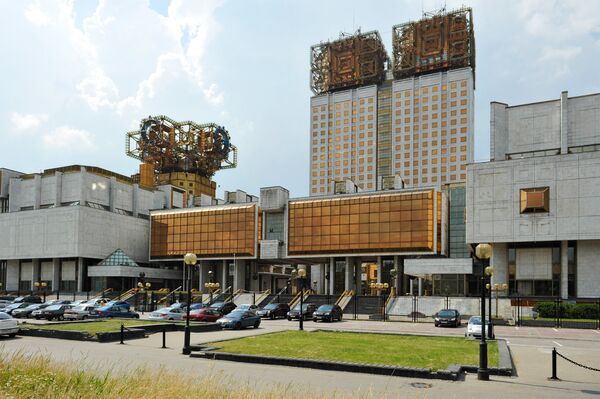 © RIA Novosti . Alexey Naumov
Subscribe
Prominent US-based Russian scientists breathed a sigh of relief Friday after a Kremlin-backed bill to reform the Russian Academy of Sciences was stripped of an option that included the academy’s possible “liquidation” and appeared to give scientists more of a say in the institution’s future.

WASHINGTON, July 5 (By Carl Schreck for RIA Novosti) – Prominent US-based Russian scientists breathed a sigh of relief Friday after a Kremlin-backed bill to reform the Russian Academy of Sciences was stripped of an option that included the academy’s possible “liquidation” and appeared to give scientists more of a say in the institution’s future.

“I didn’t understand such maniacal drive to change everything overnight, and fortunately it didn’t happen,” Roald Sagdeev, former head of the Soviet Institute for Space Research and now a professor at the University of Maryland, told RIA Novosti on Friday.

Sagdeev was among 11 Russian scientists in the United States and Europe who signed a statement last week expressing concern over the Russian government’s alleged failure to consult the scientific community before announcing its planned overhaul of the academy.

The academy’s presidium said the planned reform would cripple Russian science by handing control over to government bureaucrats with no scholarly experience and whose chief interest is in seizing the academy’s assets.

But lawmakers appear to have made concessions to the scientists following a meeting between Russian President Vladimir Putin and the academy’s president-elect Vladimir Fortov.

In a second reading Friday, Russia’s lower house of parliament passed a bill excluding the option in an earlier version to “liquidate” the academy altogether and placing Fortov atop a new agency to manage the academy’s property.

The bill will now be tabled until an expected third reading by Russian lawmakers next fall.

Vladimir Shiltsev, the Russian-born director of the accelerator physics center at the Fermi National Accelerator Laboratory outside Chicago, told RIA Novosti that lawmakers’ apparent willingness to consult with scientists about the academy’s future a positive development after the “out-of-the-blue” announcement of the overhaul on June 27.

“All of us want to see the Russian scientific community healthy, flourishing and in good shape,” Shiltsev told RIA Novosti. “And if it is reformed, that it is reformed for the better, not for the worse.”

The discussions of the reform should address how to effectively get resources directly into the hands of scientists conducting research, including moving toward a US-style system where research teams secure funding through grants, Shiltsev said.

Artem Oganov, a prominent scientist in the field of crystallography at Stony Brook University in New York, told RIA Novosti that he is “happy” with the development because while the academy is “very ill and largely dysfunctional, it can and should be reformed, not killed as proposed” by the original bill.

Russian science has much to learn from the United States, including “strong internationalism and competitiveness,” Oganov said, though he warned about simply copying certain aspects of the US scientific community when examining reforms.

“US grant and tenure systems, and general bureaucracy, have many evil sides,” Oganov said.

Sagdeev, the former Soviet space research chief, was among dozens of Russian scientists to sign a letter to Putin and other senior Russian officials stating that they will refuse to be members of the academy if it were overhauled as envisioned under the original draft law.

He praised the Russia-based signatories for standing up for their principles, saying they stood to lose more than many of their colleagues abroad who have tenure and permanent employment not linked to political winds in Moscow.

“I can only say I admire their courage,” Sagdeev told RIA Novosti.

Whether he and his fellow signatories will make good on their promise to quit the academy depends on the final text of the law, he added.

“We have to wait for the final language,” Sagdeev said.