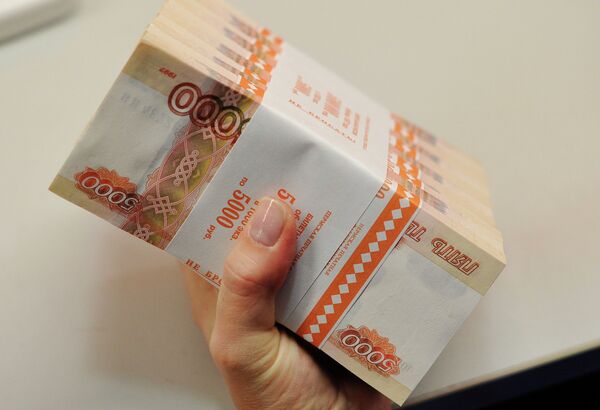 A former tax inspector included on a draft version of the Magnitsky List of Russian officials banned from the United States for human rights abuses has become a suspect for Russian investigators looking into a huge tax scam, Kommersant newspaper reported Friday.

MOSCOW, July 5 (RIA Novosti) – A former tax inspector included on a draft version of the Magnitsky List of Russian officials banned from the United States for human rights abuses has become a suspect for Russian investigators looking into a huge tax scam, Kommersant newspaper reported Friday.

Olga Tsymai, a former employee of the Federal Tax Service, allegedly signed off on documents provided to her by an unidentified group of people in 2009 and 2010 allowing certain companies to fraudulently claim large tax refunds, Kommersant said, citing investigators.

As a result of Tsymai’s actions, investigators allege that 4.4 billion rubles ($134 million) was paid out in tax refunds to fictitious companies, from where the money was moved to personal bank accounts or transferred abroad.

Tsymai, who later worked for the Defense Ministry, was included on a draft US list of Russian officials implicated in the death of auditor Sergei Magnitsky. The draft was compiled by US Senator Benjamin Cardin, one of the authors of the Magnitsky Act passed by the United States last year that punishes Russian officials accused of human rights abuses.

Magnitsky, who worked for British investment fund Hermitage Capital, was arrested on tax evasion charges in November 2008, days after accusing officials of involvement in a $230 million tax refund fraud, and died at the age of 37 following almost a year in Moscow’s Matrosskaya Tishina pre-trial detention center.

No Russian official has been charged in connection with the allegations of tax fraud leveled by Magnitsky, nor has anyone been held responsible for his death in prison. But against the express wishes of his family, Magnitsky himself is the defendant in an ongoing tax fraud trial, the first such trial of a dead person in Russian or Soviet legal history.

Tsymai, who denies the charges against her, has not been detained by police, but has signed a pledge not to leave the country, Kommersant reported.

A list of 18 Russian officials banned under the Magnitsky Act from traveling to the United States, or owning assets in the country, was published by Washington in April. It did not include Tsymai, but the Magnitsky Act also allows for sanctions to be imposed secretly.

During a visit to Russia this week, members of the Parliamentary Assembly of the Council of Europe (PACE) were criticized by Russian officials for reaching “politicized conclusions” in a recent draft report on Magnitsky’s death, according to Russian media reports.

PACE slammed Russia in the report for failing to punish anyone in connection with the case, and urged law enforcement bodies to further investigate Magnitsky's death and his allegations against Russian officials.