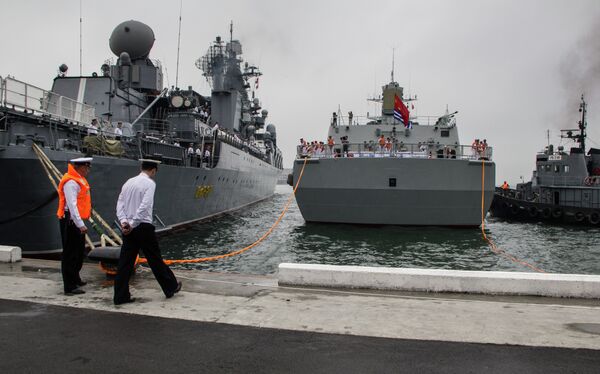 © RIA Novosti . Gennady Shishkin
Subscribe
International
India
Africa
China began its largest-ever naval exercises with a foreign power on Friday, launching a week of fleet drills with Russia in the Sea of Japan.

MOSCOW, July 5 (RIA Novosti) - China began its largest-ever naval exercises with a foreign power on Friday, launching a week of fleet drills with Russia in the Sea of Japan.

The active phase of the exercise, scheduled for July 8-10, includes scenarios such as the rescue of a hijacked ship, escort of commercial vessels, and defending a convoy from air and sea attacks.

China’s Deputy Commander-in-Chief of the Navy, Vice Adm. Ding Yiping, said earlier that the exercises were not targeted at any third parties and were aimed at improving the two states’ anti-piracy cooperation. Both nations have deployed warships to the Indian Ocean and Red Sea areas to protect merchant shipping from pirates based in the horn of Africa.

Russia and China have been conducting joint naval drills on a regular basis since 2005. Moscow and Beijing have recently vowed to strengthen military cooperation to ensure an adequate and prompt response to common threats.

The Chinese-Russian exercises come in the wake of the Dawn Blitz US-Japanese war games which were held last month on San Clemente Island, 75 miles northwest of San Diego, California.

Tensions at sea have increased between Tokyo and Beijing since last year over ownership of disputed islands in the South China Sea.