Subscribe
Russia has launched a criminal investigation into the failed launch earlier this week of a Proton-M space rocket that has sparked renewed doubts about the efficiency of the Russian space industry.

MOSCOW, July 4 (RIA Novosti) – Russia has launched a criminal investigation into the failed launch earlier this week of a Proton-M space rocket that has sparked renewed doubts about the efficiency of the Russian space industry.

Agents from the branch of Russia’s Investigative Committee at the Baikonur space center will question space program officials to determine whether safety rules were violated ahead of the unsuccessful launch.

“Investigators are examining the relevant documentation, and questioning officials who were in charge of the preparation and the launch of the rocket,” the committee’s spokesman Vladimir Markin told reporters.

“A number of forensic experiments may be ordered to establish the exact cause of the accident,” he said.

The Proton-M rocket was carrying three Glonass navigation satellites when it exploded shortly after launch early on Tuesday from the Baikonur space center in Kazakhstan.

The exploding rocket left behind a cloud of toxic heptyl, amyl and kerosene fuels, although experts believe it will not have a significant impact on the local ecology.

The Kazakhstan authorities, however, have set up a government commission led by the nation's environment minister to explore the accident's aftermath. Rumors of mass deaths of livestock in the areas adjacent to the space center were dismissed by Kazakhstan officials on Thursday.

No-one has been accused of causing the accident at this stage, but breaking launch safety rules leading to a crash carries a penalty of up to three years in prison according to Russian law.

Meanwhile, Russia has indefinitely suspended all scheduled Proton launches from Baikonur, including those for a US Sirius FM6 telecoms satellite on August 14 and a Russian Kosmos military satellite on September 5.

The Tuesday accident is the second unsuccessful launch of a Proton-M rocket carrying satellites for Russia's flagship Glonass positioning system in the last three years.

In December 2010 a Proton-M veered off course and crashed in the Pacific Ocean, after engineers overloaded the rocket with fuel, said International Launch Services, the US firm that markets commercial Proton launches.

Another Proton-M mission was unsuccessful in December 2010 after a failure in the rocket’s upper-stage Briz engine, its maker Khrunichev said. A control system glitch caused the loss of a Proton-M in August 2011, while complications with a Briz engine led to the loss of another Proton mission a year later. 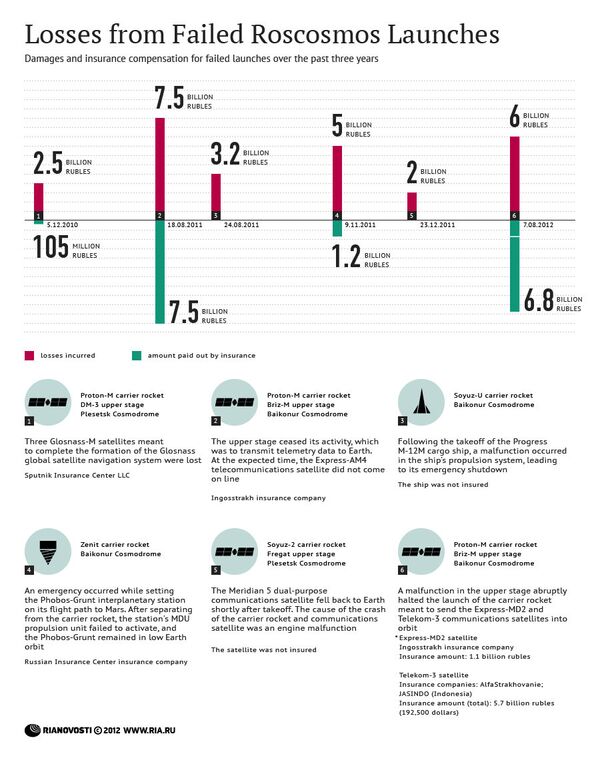 The partial failure of a Briz booster on a Proton rocket in December 2012 caused a payload to be put into an incorrect orbit, which was later corrected, Roscosmos said.

Deputy Prime Minister Dmitry Rogozin, who oversees the defense and aerospace industry and has been ordered to oversee the investigation, said after the accident that "harsh decisions" must be taken, as Russia's rocket and space industry "cannot continue to exist in its current form."