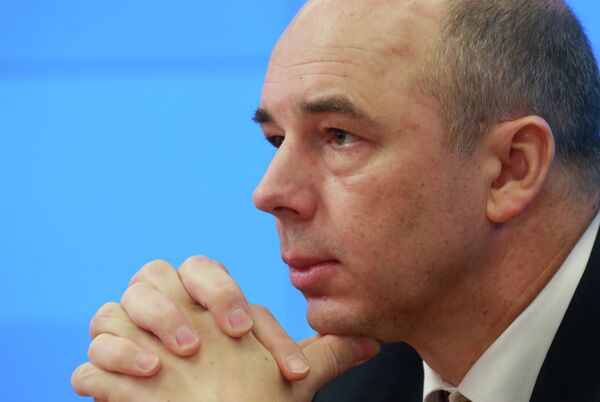 © RIA Novosti . Alexander Natruskin
/
Go to the photo bank
Subscribe
Russian Finance Minister Anton Siluanov said Thursday that this year’s federal budget could fall short 1 trillion rubles ($30 billion), and that the Reserve Fund, a safety net of oil windfalls, may be used to cover the gap.

MOSCOW, July 4 (RIA Novosti) – Russian Finance Minister Anton Siluanov said Thursday that this year’s federal budget could fall short 1 trillion rubles ($30 billion), and that the Reserve Fund, a safety net of oil windfalls, may be used to cover the gap.

He forecast a long-term downturn and revenue shortfall, at least for the next three years, and called for the government to review its budget spending. He cited unfavorable global economic trends as impairing Russia’s tax collection and privatization plans.

“In the estimates of the federal tax and customs services, the shortfall of revenues this year may total a horrific 1 trillion rubles,” Siluanov told a meeting dedicated to the federal budgets for the next three years. “There are problems with value-added tax and profit tax payments, as well as budget receipts from privatization.”

“We don’t have much time to prepare for a possible lengthy deterioration of the situation, as the budget [for 2013] has been approved with quite large spending obligations,” the minister added. “Already today we must work at optimizing these obligations and reducing them not only for the budget of 2014-2016 but also for subsequent years.”

Trends for the next three years suggest that the government has to optimize those expenditure obligations that it is currently fulfilling, he said. “This year we’ll be unable to revise the budget toward larger budget spending.”

Last week, the Russian government unveiled plans to delay the sale of major state assets over the unfavorable market, with oil giant Rosneft, hydropower holding RusHydro and the nation's second-largest lender, bank VTB, proposed among assets that should stay under state control.

“Proceeding from the current state of world markets and problems with the sale of shareholdings at fair value, proposals have been made to adjust the privatization plans for some companies,” newly appointed Economics Minister Alexei Ulyukayev said last week, presenting an adjusted privatization plan for 2014-2016.

Russia’s Reserve Fund, created to accrue windfall revenues from oil exports, could be used in the next three years to cover the budget deficit, Siluanov said Thursday.

“By laying today too optimistic forecasts as the basis for the budget, we risk facing a growing deficit and the need to cover it with the Reserve Fund. We are revising down our plan for replenishing the safety cushion,” he said.

The minister added that the budget projections for the next three years were based on an innovation scenario for the Russian economy.

The "baseline innovation" scenario envisages the creation of a modern transportation infrastructure and a competitive high-tech sector along with modernization of the raw materials sector.