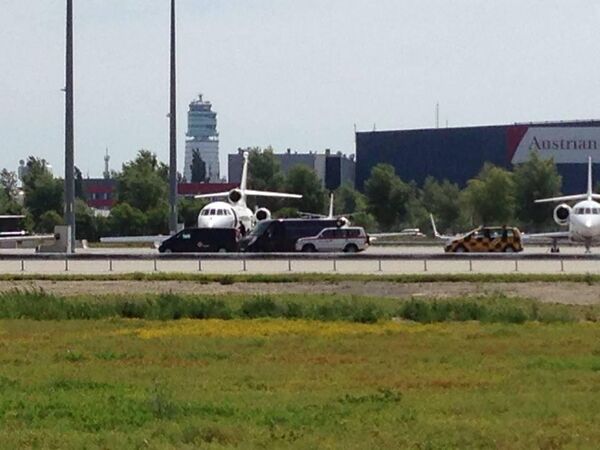 © RIA Novosti . Andrei Zolotov, Jr.
Subscribe
Bolivian President Evo Morales’s plane has been forced to land in Austria after France and Portugal refused to let the jet cross their airspace amid false rumors that US intelligence leaker Edward Snowden was on board, media cited the Bolivian foreign minister as saying.

MOSCOW, July 3 (RIA Novosti) – Bolivian President Evo Morales’s plane has been forced to land in Austria after France and Portugal refused to let the jet cross their airspace amid false rumors that US intelligence leaker Edward Snowden was on board, media cited the Bolivian foreign minister as saying.

Snowden, a former contractor for the US National Security Agency, is wanted by the United States for disclosing a top-secret surveillance program that allegedly targeted millions of Americans. He is believed to be in Moscow.

“We are told that there were some unfounded suspicions that Mr. Snowden was on the plane,” Bolivian Foreign Minister David Choquehuanca told journalists as quoted by the CNN.

“We do not know who has invented this lie, someone who wants to harm our country,” Choquehuanca said. “This information that has been circulated is malicious information to harm this country.”

Bolivian Defense Minister Ruben Saavedra told CNN en Español that he thought the US government was behind the rumors.

“This is a lie, a falsehood. It was generated by the U.S. government,” he said, adding that Bolivia’s air travel rights were violated.

Ecuadorian Foreign Minister Ricardo Patino said he planned to call a regional meeting of the Union of South American Nations, or Unasur, to discuss the situation, according to CNN.

The United States is communicating with several countries that could offer Snowden political asylum or be a stopover, about his possible return home to face criminal charges of leaking state secrets, a US State Department spokeswoman said Tuesday.

Washington has spoken with “a broad range of countries” that could either serve as “transit spots or final destinations” for Snowden, who is holed up in the transit zone of Moscow’s Sheremetyevo Airport while trying to elude US authorities, State Department spokeswoman Jen Psaki told a news briefing.

South American nations Bolivia and Venezuela have expressed possible support, but 11 of the 21 governments that the whistleblowing website Wikileaks said the fugitive former CIA employee had appealed to for possible political asylum have said Snowden must be on their respective territories in order to request political asylum, CNN reported Tuesday. Meanwhile, three of the countries – Brazil, India and Poland – have rejected his request outright.

Snowden had asked for asylum in Russia, but a Kremlin spokesman said Tuesday that the American withdrew his request after Russian President Vladimir Putin publicly stated Monday that Snowden must stop “harming our US partners” with the leaks.

The United States has revoked Snowden’s passport, but US officials have said Washington would issue him a one-time travel document in order to travel home to face a “free and fair trial.”

Corrected at 7:08 to clarify France and Portugal refused to let the plane cross their airspace, not land on their territories.