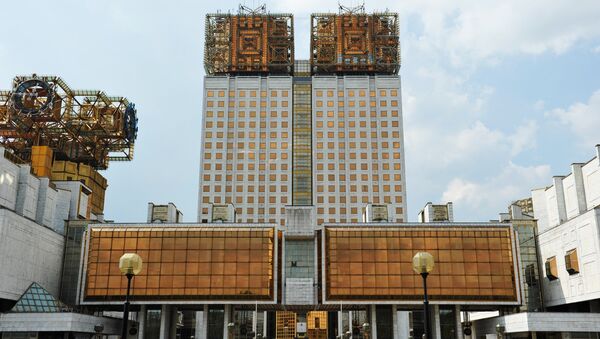 MOSCOW, July 3 (Alexey Eremenko, RIA Novosti) –A bill on sweeping reforms to the Russian Academy of Sciences, that could see it dismantled, was approved in the first reading by the lower house of the Russian parliament on Wednesday. President Vladimir Putin has already endorsed the government-backed reform, albeit cautiously, despite outcry from much of Russia’s scientific community.

The academy, founded in 1724 by Russia’s Western-looking leader Peter the Great, spelled the start of Russian science. Since then, Russian scientists have sent the first man into space, designed nuclear-powered icebreakers and helped decipher the Mayan script. But even leading figures within the academy admit that it has been flagging throughout the two decades since the collapse of the Soviet Union and needs to be reformed.

The government says the academy is blighted by excessive bureaucracy that cripples its performance. But critics see this reform as the nail in the coffin of Russia’s ailing sciences – not as the medicine it needs to get it back on track. Below you can find an outline of the problems with Russia’s Academy of Sciences, the solution proposed and problems with this solution.

-    What is the Russian Academy of Sciences?

It is not just a privileged club for eminent eggheads – the academy manages most of Russia’s scholarly research through its 434 institutes. In many countries, such as the United States, this kind of research is done at universities, but although Russia has been edging toward the US system, its universities still focus on teaching, while academy-affiliated institutes focus on research and do not teach. In Soviet times, senior academy positions also brought perks such as state-issued cars, dachas and apartments, but most of this is long gone now.

Ineffectiveness. Russian science is in the doldrums – on this academics, officials and the general public agree. However, the criteria for defining “ineffectiveness” and explaining what causes it are vague. Officials paint a picture of the academy as something of a retirement home for elderly, lethargic and possibly venal scholars. Academics maintain they are chronically underfunded. The two sides are locked in a numbers war: Each fielding statistics they feel prove their point. However, this information is often outdated, contested or simply absent.

Some of the more reliable statistics (sources given in parentheses) include:

•    In 2012 the academy received 65 billion rubles ($2 billion) in state funding, a tenfold increase from 2001 (academy).
•    An average academy researcher’s salary was 4,300 rubles ($130) per month in 2002, but grew eightfold over the next decade to reach 34,000 rubles ($1,020) last year (President Vladimir Putin).
•    Last year, the academy contributed about 57 percent of all Russian articles listed on the Web of Science, a prominent global index of scientific publications (Web of Science). Russia’s total contribution amounted to 2.06 percent of all entries on Web of Science in 2012, compared to more than 27 percent for the United States (Ministry of Science and Education).
•    The number of academy-produced publications listed on the Web of Science increased 33 percent between 2001 and 2012 (Academy of Sciences).
•    The number of researchers at academy-affiliated institutions fell 26 percent to 48,000 in 1991-2012 (Academy of Sciences).
•    Between 40 and 50 percent of researchers at academy-affiliated institutions are over retirement age (Science and Education Ministry/academy president-elect Vladimir Fortov).

Debates about the academy’s “effectiveness” also often touch upon:

•    the cost of producing a single article (allegedly lower at Russian universities);
•    citation indexes for Russian researchers (lower than in Western countries);
•    the income the academy derives from its assets, including 13,700 properties, many of them under commercial leases (with profits estimated at between 1.9 billion and 23 billion rubles a year, or $57 million to $700 million);
•    misusing academy assets.

However, no agreed-upon, up-to-date or convincing figures are available on any of these counts.

Another problem is limited staff mobility, as most researchers hold permanent positions for decades. Again, no statistics are available, but Science and Education Minister Dmitry Livanov and president-elect Fortov both agree this is a problem. A case in point is previous academy president Yury Osipov, who served for 22 years until being defeated by Fortov in an election in May.

In a nutshell, the government proposes putting the 434 academy-affiliated institutions under its direct control. The actual academy, which comprises 1,246 members, will become a “scientists’ club.” On Wednesday, Putin suggested that a new advisory council comprising world-famous scientists would join a newly created state agency in appointing the heads, overseeing research, and managing the assets of those 434 institutions, but did not elaborate.

The Russian government has a dismal track record on institutional reform, so dismal that the Center for Strategic Research, a government-affiliated but outspoken think-tank in Moscow, singles it out as the one thing the government is completely incapable of doing.

The reform bill does not explain why government bureaucrats are a better suited than veteran scientists to run research outfits like the Institute for Design Problems in Microelectronics or the Institute of Macromolecular Compounds, nor does it explain how academic independence fits into the picture.

It is also possible that the government wants to control and exploit the academy’s assets, said academy member Valery Rubakov, who compared the reform to “corporate raiding.”

Critics cite similar reforms at the Defense Ministry that saw state-approved contractors take control over its non-military assets and ended in a major corruption scandal.

Prominent news website Gazeta.ru also alleged earlier this week that the reform could be personal revenge by academy member Mikhail Kovalchuk, whose brother Yury is reportedly one of Putin’s close associates. The report claimed that Mikhail Kovalchuk instigated the crackdown on the academy after being repeatedly denied senior-member status that that would have allowed him to run for its presidency.

Representatives for Kovalchuk and Putin had not publicly commented on these allegations as of Wednesday.

Many scholars advocate a reform of the academy – among them president-elect Fortov, Russian-born Nobel Prize laureate Andre Geim and prominent physicist Alexei Khokhlov, who outlined an alternative in a reformist manifesto last year. It proposed three key changes:

•    Amend the state funding system to distribute more money through grants as opposed to fixed salaries for permanent staff;
•    Curb permanent staff positions and hire most researchers through open tenders and for a limited period of time;
•    Increase funding for science.

Whether any of the above is included in the reform will be clear in the fall, when the bill enters the third and final reading.

Meanwhile, pundits note that the academy's history is fundamentally a 290-year-long tug-of-war with state bureaucracy, which has always sought to increase control over the country’s scholars. Empress Anna installed courtiers to run the academy, Josef Stalin purged academics and banned or censored certain disciplines outright, while Nikita Khrushchev threatened to disband the academy for recalcitrance. Despite its bold beginnings, the current Russian Cabinet has yet to show how it will hold up in the standoff.