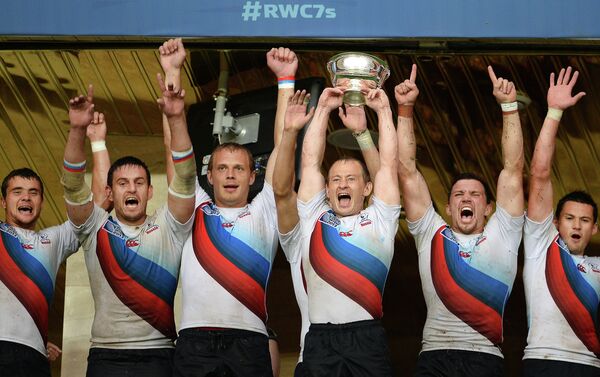 © RIA Novosti . Ramil Sitdikov
/
Go to the mediabank
Subscribe
International
India
Africa
Russia salvaged some pride in front of their home crowd by lifting the third-tier bowl at the Rugby World Cup Sevens on Sunday, beating Japan 29-5 in the final.

MOSCOW, June 30 (R-Sport) - Russia salvaged some pride in front of their home crowd by lifting the third-tier bowl at the Rugby World Cup Sevens on Sunday, beating Japan 29-5 in the final.

Russia finished 17th of 24 teams, far below their best result of ninth at the 2001 World Cup, and failed to achieve a breakthrough on the world stage.

"Our spirit was very high today, we played very well and luck was on our side, even the weather conditions helped us," Russia's Galinovsky said. "We finished only 17th, we planned to perform better, but that's life, we are sorry."

Alexander Yanyushkin was the hero for Russia, using his pace and agility to run in two tries on a waterlogged pitch.

Russia went ahead when diminutive Yanyushkin seized the loose ball off a deflected kick and darted in at the right corner.

Northampton Saints wing Vasily Artemyev doubled the lead to 10-0 when he scored from an opening Galinovsky created with a turnover.
At the end of the half, Lepuha Letuila sped in behind the Russian line for a try that made the score 10-5.

Yanyushkin struck early in the second half, taking full advantage of a gap in the Japanese line for his second try.

Russia’s lead extended to 17 points after a converted try late in the second half, Galinovsky and Vladimir Ostroushko combining well to send Vladislav Lazarenko clear for a run under the posts. On the last play of the game, Denis Simplikevich ran in another try.

"We failed all three games at the group stage, so today we had no other choice as to win," Ostroushko said. "We planned to make into the first eight teams. So now we have to work hard and try to correct our mistakes."

The poor play in the pool games, including a 12-12 draw with Japan, that stopped Russia acheiving a real breakthrough at their home tournament was branded “disgustingly embarrassing” by player Igor Galinovsky earlier in the day, and certainly represents a failure to meet expectations.

The Russian government has poured resources into rugby in recent years in hope of building a men’s sevens team capable of challenging the world’s best when the discipline debuts at the Olympics in 2016.

Russia are still far away from that level, as evidenced by their 31-0 hammering by South Africa and 21-5 defeat to Scotland in the pool stage.

One positive sign, however, came earlier this month when the Bears reached the final of a European Grand Prix event in Lyon, losing 33-5 to England.