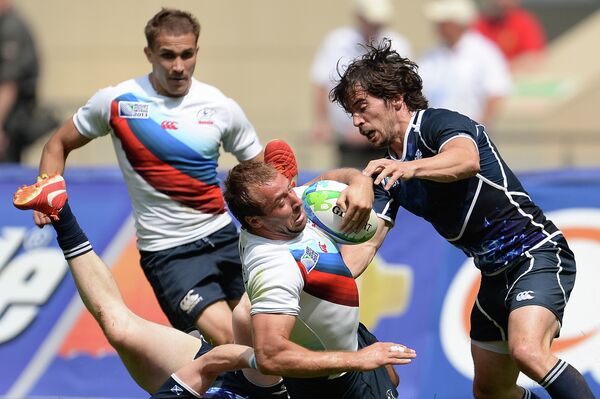 MOSCOW, June 29 (R-Sport) – Scotland’s rugby team battled to a 21-5 win over hosts Russia in their second match of the Rugby World Cup Sevens in Moscow.

Russia recovered a modicum of pride after being beaten 31-0 Friday by South Africa, but their second defeat of the tournament leaves them last in Pool B. Only a win over Japan later in the day can rescue the Russian side, nicknamed the Bears, from playing in the third-tier bowl Sunday.

South Africa’s Springboks remain firmly in charge of Pool B after running in five tries in a 33-0 thumping of Japan, with pacy winger Seabelo Senatla grabbing his third and fourth tries of the tournament.

South Africa and Fiji are the only teams not to concede a single point in the tournament.

Scotland, who struggled to a 19-17 win over Japan in their first game, looked unconvincing against their Russian opponents.

Russia scored their first points of the tournament early in the second half with a try from fast Northampton Saints winger Vasily Artemyev, but remained 7-5 behind when Alexander Yanyushkin failed to convert.

The decisive try came from Scotland’s powerful Andrew Turnbull and, as Russia tried to push back, Mark Robertson punished them with another score.

All teams play their final two pool games Saturday but only pool winners are guaranteed a place in the quarterfinals.

The Rugby Sevens World Cup is the first major rugby tournament to be held in Russia, and is taking place in baking heat at Moscow’s vast Luzhniki stadium. It is the last such tournament before rugby sevens makes its Olympic debut in Rio de Janeiro in 2016.