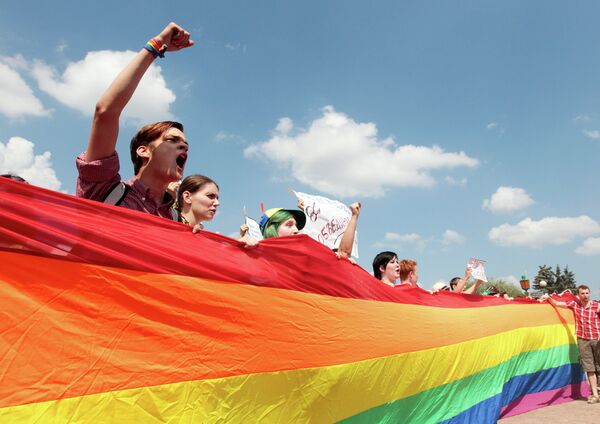 A sanctioned gay pride gathering in St. Petersburg on Saturday ended in the detention of demonstrators and violent scuffles between police and anti-gay campaigners.

MOSCOW/ST.PETERSBURG, June 29 (RIA Novosti) – A sanctioned gay pride gathering in St. Petersburg on Saturday ended in the detention of demonstrators and violent scuffles between police and anti-gay campaigners.

Media reports estimated that several dozens of LGBT activists came to the Field of Mars (Marsovo Pole) in the city’s downtown to rally for gay people's rights in Russia. The event was attended by some 200 of anti-gay activists urging to ban the rally and throwing eggs at their opponents.

“After the complaints of local residents, representatives of the local administration and the police warned the protestors that their protest was illegal and asked them to leave,” a police spokesperson said. Police officers then broke up the protest and arrested dozens of gay rights activists, the spokesman added.

The Field of Mars is the city’s “Hyde Park” where demonstrations are allowed without special sanctions.

The law setting fines for "gay propaganda" among minors came into force in St. Petersburg on March 30, 2012. It faced strong criticism from rights activists both in Russia and abroad, but a similar federal bill banning promotion of “non-traditional sexual relations” was approved this week by the upper house of the Russian parliament.