60 Arrests As Confrontation over Immigration Ends in Brawl 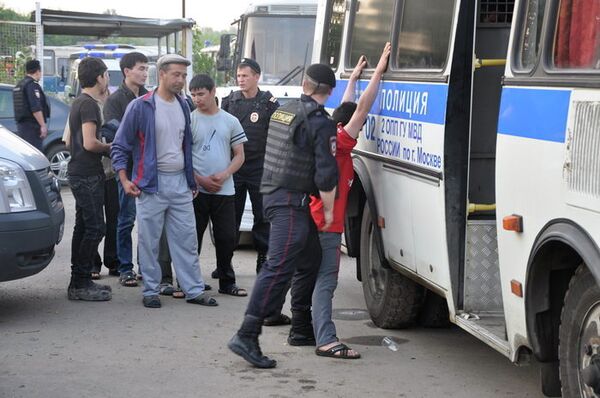 © Photo : Ministry of Internal Affairs of Russia in Moscow
Subscribe
About 60 people were detained late Friday following a fight in the Russian capital apparently linked to the actions of an informal group of volunteers that campaigns against illegal immigrants, according to police.

MOSCOW, June 29 (RIA Novosti) – About 60 people were detained late Friday following a fight in the Russian capital apparently linked to the actions of an informal group of volunteers that campaigns against illegal immigrants, according to police.

The brawl broke out shortly after 8:00 p.m. when members of the Moscow Shield organization “checked the immigration status of citizens from the near abroad” at an address in northwest Moscow, a police spokesman said Saturday.

Footage apparently shot by Moscow Shield activists before fighting broke out shows men wearing masks and holding air pistols entering an underground building before rounding up a group of young men, who appear to be from Central Asia, in a yard outside.

Like Russia as a whole, Moscow is heavily dependent on migrant laborers, mainly from Central Asia, but large sections of society are opposed to increased levels of immigration.

All those arrested were later released, and two were fined for migration offenses, a police spokesperson said later on Saturday.

Moscow Shield, which carries out searches for illegal immigrants before reporting violations to the authorities, said in a statement on their page on Vkontakte, a Russian social networking site, that none of their activists were arrested, and the police statement was a lie.

The group had earlier announced the Saturday event on Vkontakte. The description of the planned event read: “A big raid! Bring your friends! We can’t let any of the illegals get away!”

The organization did not respond to calls to the phone number on its Vkontakte page Saturday.

Immigration has become a focal point of the upcoming Moscow mayoral elections, with candidates calling for a tougher line on illegal immigration and on migrant workers who do not assimilate into Russian culture.

Acting Moscow Mayor Sergei Sobyanin, who is expected to win the September elections, has said that the overwhelming majority of crimes in the capital were committed by “visitors.” And in May, just prior to the announcement of his mayoral bid, he said in an interview that “people who speak Russian badly and who have a different culture are better off living in their own country."