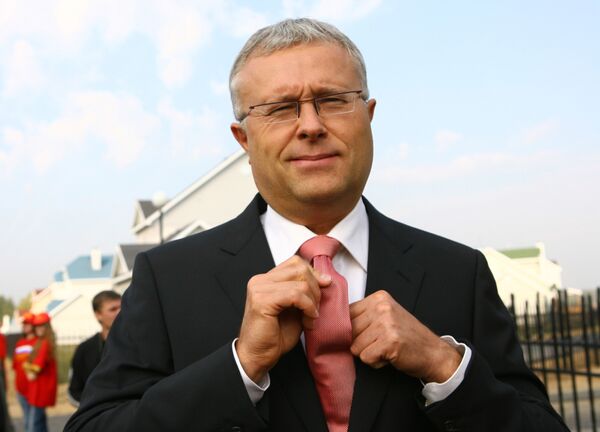 © RIA Novosti . Ilya Pitalev
/
Go to the photo bank
Subscribe
Prosecutors asked a Moscow court on Friday to sentence multi-millionaire Alexander Lebedev to 21 months of “restricted freedom” over a 2011 minor brawl with a Russian businessman.

MOSCOW, June 28 (RIA Novosti) – Prosecutors asked a Moscow court on Friday to sentence multi-millionaire Alexander Lebedev to 21 months of “restricted freedom” over a 2011 minor brawl with a Russian businessman.

The former billionaire has been charged with hooliganism and battery after punching fellow tycoon Sergei Polonsky during the filming of a talk show on the NTV TV channel back in 2011.

A sentence of “restricted freedom” would mean Lebedev won’t be allowed to attend mass gatherings or change his place of residence or work without permission from law enforcement authorities.

On Friday, the prosecution insisted that Lebedev’s guilt in the battery charge has been proven in the trial, which is coming to an end at Moscow’s Ostankinsky District Court.

Lebedev, a former KGB officer, has not admitted his guilt and says the charges are unsubstantiated, insisting that he was acting in self-defense. He has maintained that the charges against him are politically motivated.

The original charges included hooliganism "motivated by political hatred," but later the prosecution said that the conflict between the businessmen had been proven to be personal, not political.

Lebedev owns several British newspapers, including The Independent, as well as a 4.5-percent stake in Russia's largest airline Aeroflot, and is also co-owner of Russia's Kremlin-critical Novaya Gazeta newspaper.

Polonsky hasn’t testified at the trial, as his defense says he is not allowed to leave Cambodia, where he was released on bail after being accused of assaulting local sailors during New Year’s celebrations in late December. He is on Russia's wanted list over an alleged property fraud in Moscow and is rumored to have fled to Israel.

Polonsky did, however, write a sarcastic statement on Facebook asking the court to pardon Lebedev for "his unbalanced state of mind."

"I ask [the court] not to issue a guilty verdict for Lebedev, because he won't survive prison, and a fine is not a significant punishment for him," Polonsky wrote on his page.