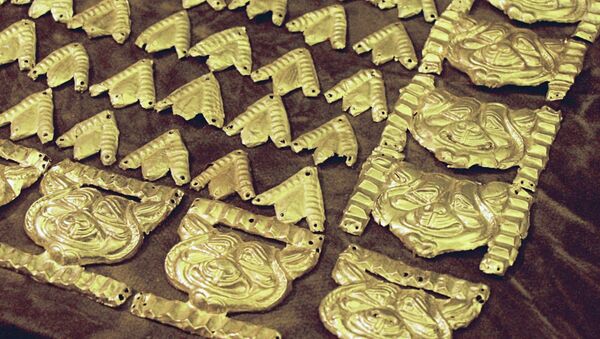 © Sputnik / Dmitriy Korobeinikov
/
Go to the mediabank
Subscribe
International
India
Africa
Ever heard about the curse of the pharaohs? Well, how about the curse of a 2,500-year-old chief of a nomadic Scythian tribe that brings about floods, droughts, livestock decimation and high atmospheric pressure?

MOSCOW, June 28 (RIA Novosti) – Ever heard about the curse of the pharaohs? Well, how about the curse of a 2,500-year-old chief of a nomadic Scythian tribe that brings about floods, droughts, livestock decimation and high atmospheric pressure?

Though the curse of the pharaohs has repeatedly been debunked as myth, the Scythian curse is very real, say locals in a remote area of eastern Kazakhstan where the chieftain’s remains were discovered – and where they will be reinterred this weekend to appease his spirit, to the chagrin of archeologists.

In 2003, an archeological expedition dug up a burial mound in the Shiliktinskaya Valley to find a Golden Man – a presumed leader of the Saka tribe, a branch of the Scythian nomads that populated Central Asia and southern Siberia in the 1st millennium BC.

The pagan Saka fought the ancient Persians and Indians, and grew rich through trading across the great steppes of Central Asia. Some of their wealth ended up in the tombs of their chieftains, who were buried wearing jewelry and gold-plated armor – like the man in the Shiliktinskaya mound, the third such find in Kazakhstan since 1970.

But not all Golden Men are equally lucky. While one found in 1970 went on to become Kazakhstan’s unofficial symbol, the chieftain from the Shiliktinskaya Valley has been blamed for climate change and other problems.

Since the mound was excavated, the area around it has been hit by several floods, a drought, a mass loss of livestock and an increase in births of children with learning disabilities, locals said, Kazakh television KTK reported.

“[Since the excavation], we have had snowfall and storms in winter. The weather has turned upside down ecologically. We have got [high atmospheric] pressure now,” local woman Aiduriya Kumpisova told KTK.

“The elders blame it on the excavation,” agreed Aidyn Egubayev, who has spent five years campaigning for the reburial of the Golden Man, Tengrinews.kz said Friday.

Scholars dismissed the rumors, pointing to global climate change as the reason for the area’s problems, KTK said.

But archeologists had to concede to reinter the Golden Man at the request of the Kazakh Culture Ministry and after “unrest” among locals, the channel said. He will be returned to the mound on Sunday.

This is not the first time Kazakhstan has given in to the demands of the supernatural: Last year, residents in the town of Karabulak sacrificed a white camel to stop a “suicide epidemic” allegedly instigated by the devil.

Russia’s republic of Altai campaigned for two decades for the return of the Siberian Ice Maiden (also known as the Altai Princess), a 2,500-year-old mummy found in Siberia in 1993. Locals claimed the removal of the mummy had brought various calamities upon the republic, and managed to have the Siberian Ice Maiden returned to a local museum, though not her burial mound.