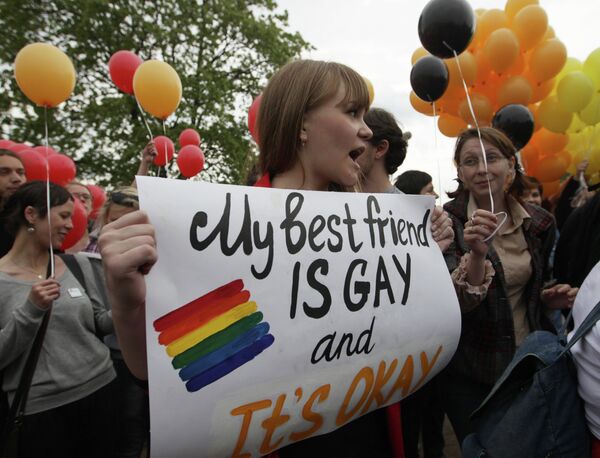 The Oktyabrsky District Court this week ordered Nikolai Alekseyev to pay 10,000 rubles ($300) to local legislator Vitaly Milonov in compensation for the litigation cost of one of the five defamation lawsuits that Alekseyev lost against Milonov.

Milonov said the activist sued him after the lawmaker, known for his outspoken views on homosexuality and religion, sent him greetings on March 8, which is a public holiday in Russia celebrating Women's Day.

"He was on TV the day before the holiday and he mentioned having a husband," Milonov said. "I thought it would be polite to send the wife a traditional holiday greeting. He felt insulted, but I didn't know things were different with them. I simply thought that if someone is referred to as a husband, the other one is supposed to be a wife, even if of an unconventional kind. But it turned out they were both husbands."

Alekseyev told RIA Novosti that he planned to appeal the ruling in the St. Petersburg City Court. "We will definitely appeal this decision," he said.

The law setting fines for "gay propaganda" came into force in St. Petersburg on March 30, 2012. It faced strong criticism from the LGBT community and rights activists both in Russia and abroad, but a similar federal bill was approved this week by the upper house of the Russian parliament.