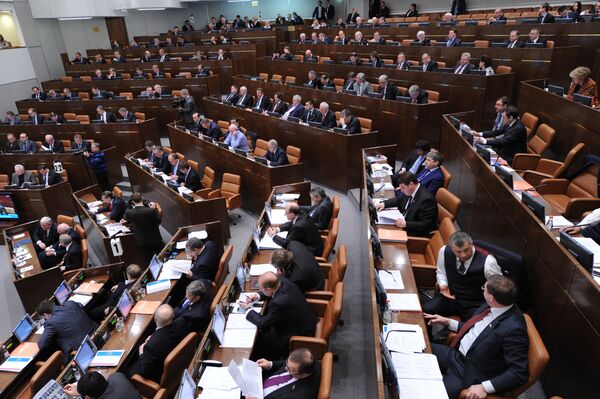 Russia’s upper house of parliament on Wednesday gave final approval to three controversial bills, laying out measures to shield children from the influence of homosexuals as well as safeguard the faith of religious believers.

MOSCOW, June 26 (RIA Novosti) – Russia’s upper house of parliament on Wednesday gave final approval to three controversial bills, laying out measures to shield children from the influence of homosexuals as well as safeguard the faith of religious believers.

Two of the bills would respectively ban adoptions of Russian children by same-sex couples abroad and impose steep fines for the promotion of “non-traditional sexual relationships” toward minors. The third bill would criminalize any act that offends religious believers, a measure proposed following Pussy Riot’s punk-prayer protest in a prominent Moscow cathedral.

Russian President Vladimir Putin is expected to sign all three bills into law.

Speaking at a meeting with his Finnish counterpart on Tuesday, Putin emphasized that such legislation did not violate the rights of sexual minorities and was, in fact, designed to “protect” Russian children. Sexual minorities, he said, “are full-fledged members of our society and are not being discriminated against in any way.”

However, the wording of the “non-traditional sexual relationships” bill is so vague that it may enable individuals to be implicated for even telling children that gay people exist. The adoption ban would additionally apply to unmarried foreigners who live in the more than a dozen countries where same-sex marriage is legal.

Under the bill to safeguard religious faith, anyone who commits an offensive act during a religious ceremony would face a fine of up to 300,000 rubles ($9,000) and up to 200 hours of compulsory community service. Moreover, for an offense at any holy site, the punishment would be up to five years in jail, a maximum fine of 500,000 rubles and up to 400 hours community service.

The “non-traditional sexual relationships” bill sets out jail terms of up to 90 days and maximum fines of 1 million rubles ($30,000) for promoting such relationships in the media or on the Internet.