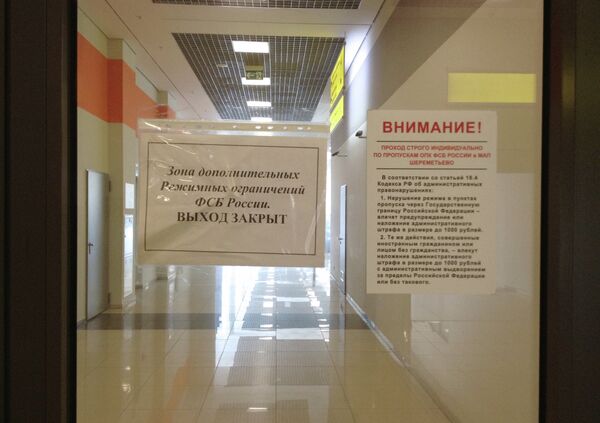 © RIA Novosti . Vladimir Dobrovolskiy
/
Go to the mediabank
Subscribe
International
India
Africa
US whistleblower Edward Snowden, stuck in a Russian airport since Sunday, appeared to have a transit visa – but even if he does not, he may get away with just a small fine, a Russian border guards spokesman told RIA Novosti on Wednesday.

MOSCOW, June 26 (RIA Novosti) – US whistleblower Edward Snowden, stuck in a Russian airport since Sunday, appeared to have a transit visa – but even if he does not, he may get away with just a small fine, a Russian border guards spokesman told RIA Novosti on Wednesday.

“Looks like he’s got a visa, that’s why he’s staying here,” a spokesman for the Border Guard Service office at Moscow’s Sheremetyevo Airport said by telephone.

He could not say which of several state agencies entitled to issue such visas could have done it.

Foreigners need a transit visa if they stay in Russia for more than 24 hours en route to another country, according to the regulations.

Television channel Rossiya-24 said earlier this week that Snowden did not have such a visa, which puts into question the legality of his stay at Sheremetyevo’s transit area.

The US authorities have annulled Snowden’s passport, which, the White House said, should render him unable to travel internationally. The annulment was first reported on Saturday, hours before Snowden’s departure from Hong Kong to Moscow, but that did not prevent him from boarding his Russia-bound plane.

In any case, transit passengers whose paperwork does not conform to Russian border regulations only face a fine of 1,000 rubles ($30), according to the country’s Administrative Code.

Offenders may also be deported to their country of departure, but the border guards decide this on a case-by-case basis, the service’s spokesman said.

Some previous media reports claimed Snowden could not board a plane from Moscow because he has no valid ID.

The founder of the whistleblowing website Wikileaks, Julian Assange, said on Tuesday that Snowden, who has requested asylum in Ecuador, was issued a “refugee document of passage” by the Ecuadorian authorities, which should replace the annulled passport.

The Ecuadorian Embassy in Moscow declined to comment on Wednesday on Assange’s claims.

Snowden fled to Hong Kong after exposing earlier this month the US state electronic surveillance system PRISM, and questioning its legality. He then left Hong Kong, which as part of China has an extradition treaty with the United States, and was expected to go to Ecuador by way of Moscow and Cuba, but has remained since Sunday in Sheremetyevo’s transit area, where he can stay without technically crossing the Russian border.

World media have speculated that Snowden’s departure could have been postponed by the Russian secret services who may be interested in questioning him. Those rumors remain as yet unconfirmed.

Russian President Vladimir Putin and Foreign Minister Sergei Lavrov both said on Tuesday that the Russian government has not been involved with Snowden and was initially unaware of his intention to come to Russia.