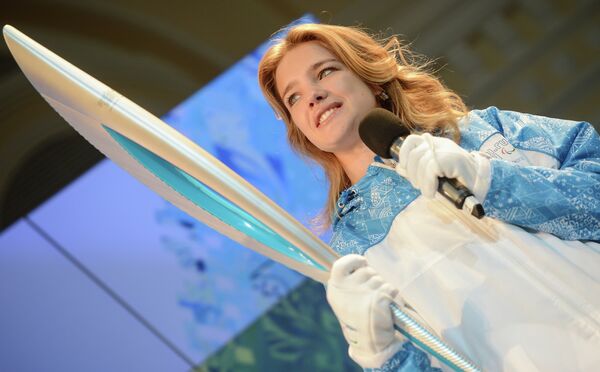 Russia scaled back its ambition to send the Sochi 2014 Olympic flame into space on Monday but promised the next best thing: an unlit torch aboard a rocket bound for the International Space Station.

MOSCOW, June 24 (R-Sport) – Russia scaled back its ambition to send the Sochi 2014 Olympic flame into space on Monday but promised the next best thing: an unlit torch aboard a rocket bound for the International Space Station.

Russian Olympic Committee chief Alexander Zhukov suggested earlier this year efforts would be made to send the flame into space as part of its 123-day tour of Russia, beginning in October.

On Monday, Sochi chief organizer Dmitry Chernyshenko and Vladimir Popovkin, the head of Russia's space agency, announced a torch - one of 14,000 expected to be used in the 65,000-kilometer relay - will launch from the Baikonur Cosmodrome in central Kazakhstan on November 7.

According to Chernyshenko, the interstellar journey would appear to mean the relay itself will venture into space.

"Our ambition to conquer Space 1st time ever in the Olympic history becomes reality," he tweeted Monday. "#Sochi2014's Torch Relay will reach the open space!"

But the torch will remain unlit throughout the voyage because of safety regulations on board the ISS, Popovkin said. "We've got a rocket fueled by oxygen and kerosene, so there are basic safety rules," Popovkin said. "There can't be any naked flames."

While that dashes earlier hopes by organizers that Russia would make the historic move of sending the Olympic flame into space, it also appears to dispute Chernyshenko's suggestion the space voyage will be part of the official relay. It remains unclear if earthly torch relay will break during the space voyage.

Chernyshenko, however, said the same torch will light the Olympic flame at the Opening Ceremony on February 7, 2014, and used the announcement at Star City, the site of the Yuri Gagarin Cosmonaut Training Center near Moscow, as an occasion to boast.

"This is a demonstration of our successes and our achievements and Russians, they should be proud," he said. "Today we have added a new page in the history of the Sochi Olympic Games project."
According to Popovkin, Russian cosmonaut Mikhail Tyurin and American engineer Richard Mastracchio and Japanese engineer Koichi Wakata will accompany the torch in a Soviet-designed Soyuz spacecraft.

The station, which is currently commanded by Russian cosmonaut Pavel Vinogradov, has an orbit height of 370 to 460 kilometers, according to NASA. On board, Russian cosmonauts Oleg Kotov and Sergey Ryazan will chaperone the torch on a spacewalk, Chernyshenko said.

After the flame arrives from Greece in October, it begins its odyssey in Moscow, spiraling out from the capital before heading east and looping around the Kamchatka Peninsula, down to Vladivostok and back across southern Siberia via Lake Baikal, the world’s largest freshwater lake.

On its way through more than 2,900 towns in Russia’s 83 regions, the torch will make its way back into European Russia, eventually winding down to the Black Sea resort of Sochi for the Opening Ceremony on February 7, 2014.
More than 14,000 torchbearers and 30,000 volunteers will be involved in the journey as the torch travels by foot, car, train, plane and troika, a traditional Russian sleigh.

(Updated at 2:37 to clarify that torch, not flame, will journey into space)