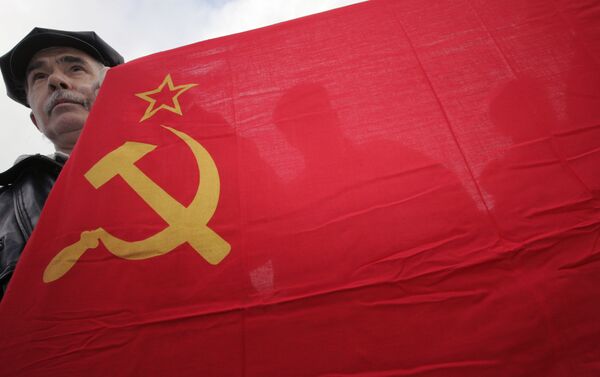 Latvia’s parliament on Thursday approved amendments to ban the use of Soviet and Nazi flags, anthems, uniforms, as well as swastikas and hammer-and-sickle emblems, at all public events.

“The Latvian parliament’s decision to equate symbols of a country that made a crucial contribution to the victory over Nazism, with symbols of the hateful Nazi regime evokes deep outrage,” Foreign Ministry spokesman Alexander Lukashevich said in a statement.

He accused Latvian authorities of a “blasphemous attempt to rewrite the history of World War II,” adding that such “historical experiments” could damage bilateral relations.

The legislation was partly inspired by pro-Russia rallies as well as SS veteran parades – both of which Latvian authorities regard as attempts to “divide” the country. Latvian President Andris Berzins is expected to sign the amendments into law sometime this summer.

Latvia’s official position is that it was occupied by the Soviet Union from 1940 through 1991. Russia, as a successor to the Soviet Union, does not recognize such occupation.

Russia has long been at odds with the Baltic states of Lithuania, Estonia and Latvia over what it sees as attempts to diminish the Soviet role in the defeat of Nazi Germany.

While Russia maintains that the Red Army liberated the Baltic states from German invaders, many residents of those republics put the two occupations on a par, citing mass Stalin-era deportations and murders of the local population by Soviet secret police.

Latvia is home to a significant proportion of Russians, estimated at about a quarter of the population. Many of them celebrate Victory Day on May 9.