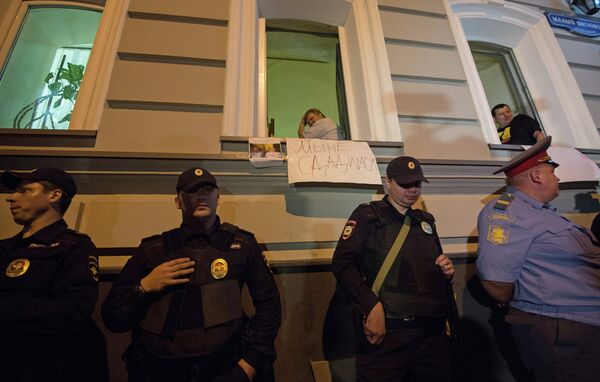 © RIA Novosti . Maxim Blinov
/
Go to the mediabank
Subscribe
International
India
Africa
Seven people caught up in the eviction of a Russian human rights organization from its Moscow office on Saturday have formally notified the police of injuries they allegedly suffered in the incident, the police said.

MOSCOW, June 22 (RIA Novosti) - Seven people caught up in the eviction of a Russian human rights organization from its Moscow office on Saturday have formally notified the police of injuries they allegedly suffered in the incident, the police said.

“The Interior Ministry has been contacted by seven people about injuries caused by unknown people (not the police),” the police said in a statement. “As of yet there is no message from the medical authorities about those hurt in the course of this conflict.”

The For Human Rights NGO was evicted from its office in downtown Moscow in the early hours of Saturday morning, on the order of the city authorities. The police said they had maintained public order during an eviction operation by “employees of a private security concern.”

Lev Ponomaryov, a prominent human rights campaigner told NTV news channel he had been “beaten up” by the police as he was taken out of the office. He described the incident as a “raider snatch,” and insisted the rent for the property had been paid up to the end of June.

Opposition Yabloko party leader and Moscow mayor candidate Sergei Mitrokhin was among those “led out” of the building. Russian ombudsman Vladimir Lukin arrived at the office, but the police did not let him in.

The office will now be occupied by a local Moscow city government social welfare department, the deputy manager of the city’s property department, Yekaterina Solovyeva said.

She claimed the Moscow City Government had notified Hot Line, a regional subsidiary of For Human Rights, in February that it had to leave the premises as its rental agreement had expired.

“Three months had expired after their notification so we asked them to leave the building. So, yesterday we undertook the eviction from this building. The city acted within the law,” she said.

US Ambassador to Russia Michael McFaul said on Twitter that the incident was “yet another case of intimidation of civil society. We are concerned by the message about the use of force to take the For Human Rights NGO office.”

(Updated at 9:00 p.m. with new headline to clarify that police did not carry out eviction)