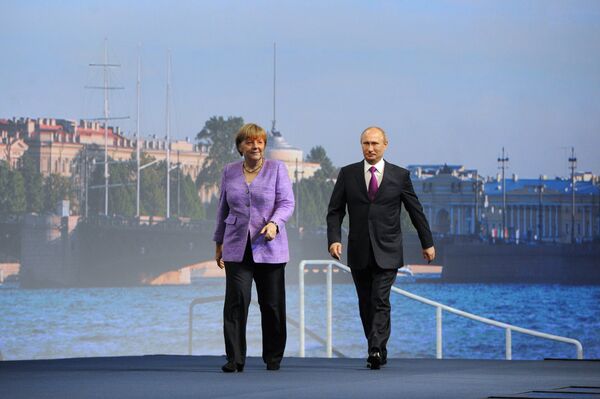 © RIA Novosti . Michail Klimentiev
/
Go to the photo bank
Subscribe
Russian President Vladimir Putin said Friday afternoon that his planned visit to an exhibition with Germany's Chancellor Angela Merkel would go ahead, contrary to earlier press reports that the event had been canceled due to a controversy over works of art taken by the Soviet Union from Germany during and after World War II.

MOSCOW, June 21 (RIA Novosti) - Russian President Vladimir Putin said Friday afternoon that his planned visit to an exhibition with Germany's Chancellor Angela Merkel would go ahead, contrary to earlier press reports that the event had been canceled due to a controversy over works of art taken by the Soviet Union from Germany during and after World War II.

Merkel also confirmed that the visit would take place and she would freely speak her mind about the Bronze Age art exhibition at St. Petersburg's Hermitage Museum, which includes works once owned by German museums.

Earlier press reports in German media had cited Merkel’s spokesman Steffen Seibert as saying that Russia had canceled the visit amid concerns that Merkel intended to address the issue of “looted art” in her opening speech. Putin’s spokesman Dmitry Peskov denied the visit was canceled due to a dispute and cited a clash in the two leaders' schedules, the Financial Times reported.

"We haven't canceled anything," Putin told journalists on the sidelines of an international economic forum in St. Petersburg, adding that decisions about attending the exhibition were based solely on timing. "Now, when, together with madame chancellor, [we] have looked at the timing and understood that we will have enough time for the press conference, and the meeting with businesspeople, and will manage to drop by the Hermitage. So this problem does not exist."

Speaking at a joint press conference with Merkel, Putin also said the issue of trophy art is a "sensitive" one and progress in resolving it would be impeded by making "a big deal" out of it. Moreover, he added, "we really shouldn't open up this discussion now because then people will come along from the Russian side and calculate the damage done to our art during World War II."

"This is a very important exhibition, and we think that we will express our feelings about this there as well," Merkel said, according to a Russian translation of her comments posted on the Kremlin website.

Russia has pointed out that Nazi forces and their allies looted and destroyed Soviet museums and private collections as part of a policy of eradicating “subhuman” art created by the "inferior" Slavic race.

Soviet soldiers and officials, meanwhile, confiscated tens of thousands of exhibits from the museums and private collections of Germany and its World War II allies. Russia returned some of them, including Rafael's Sistine Madonna, in 1956.

Moscow has long claimed that much of the art “looted” by the Soviets had previously been expropriated from other European countries occupied by Nazi Germany during the war.

Russian Culture Minister Vladimir Medinsky recently reiterated Russia’s determination not to return the art, saying on Sunday that the works taken from Germany and its wartime allies are Russia’s property “paid for by the blood of our soldiers.”

Headline changed, updated throughout to include Putin's and Merkel's comments.