The operation of the unit was suspended early on Friday after a leak detector sounded the alarm.

The contaminated water has been contained within the complex and radiation levels in surrounding areas have not changed significantly, Kyodo said citing the plant operator, Tokyo Electric Power Co. (TEPCO).

The new leak is the latest in a series of troubles at the Fukushima NPP, which was partially destroyed in March 2011, when Japan was hit by a massive 9.0-magnitude quake and ensuing tsunami, claiming over 15,000 lives and triggering a number of explosions at the plant.

The tsunami caused a partial meltdown at three of the nuclear plant’s reactors. Radiation leaked into the atmosphere, soil and seawater, making the accident the world's worst nuclear disaster after Chernobyl. 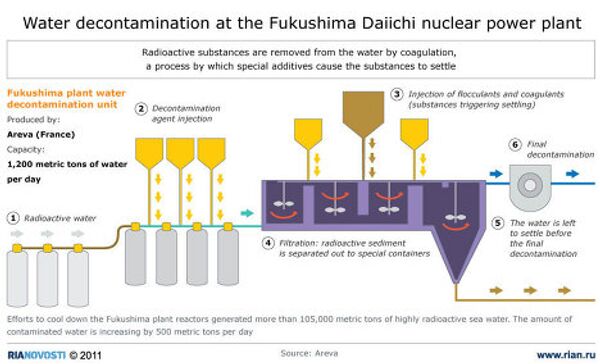 Japan will need at least 40 years to recover fully from the nuclear catastrophe, scientists say.

Some 315,000 victims are still living in a temporary housing unable to return to their houses in the plant’s vicinity.