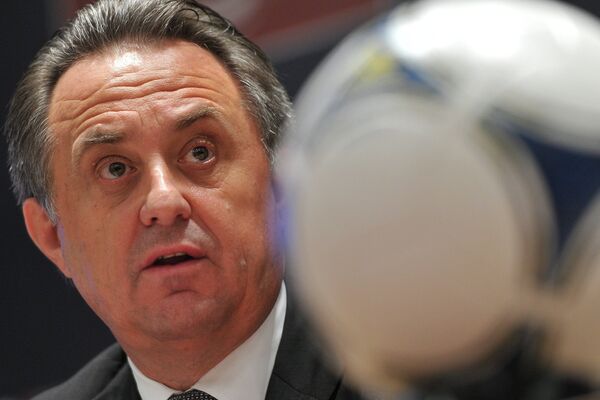 © RIA Novosti . Ramil Sitdikov
/
Go to the photo bank
Subscribe
Transparency is the watchword for the Russian government as it attempts to prevent corruption during preparations for the football 2018 World Cup but there is no formal anti-corruption strategy in place yet, Sports Minister Vitaly Mutko said on Thursday.

MOSCOW, June 20 (R-Sport) - Transparency is the watchword for the Russian government as it attempts to prevent corruption during preparations for the football 2018 World Cup but there is no formal anti-corruption strategy in place yet, Sports Minister Vitaly Mutko said on Thursday.

The budget for Russia's first World Cup rose above $20 billion last week, roughly double the estimate President Vladimir Putin cited while bidding for the tournament in 2010, with huge sums spent on everything from stadiums to airport upgrades.

“We’re going to do everything we can to make this project transparent,” Mutko said. “The more openness there is, it seems to me, the fewer opportunities there are for corruption.”

Each part of the budget will be checked at every stage of the design and building process, he added, with a principle of “hyper-personal responsibility” to make individual officials accountable.
“From the start, this project, which is starting now, will be kept under public control. That’s one of the right things [to do],” he added.

Mutko admitted there was so far no overall anti-corruption strategy for the World Cup, adding that the government planned to hold meetings with all the agencies involved, including the security service (FSB) and the state Audit Chamber.

He suggested anti-corruption efforts would be modeled on those used in the run-up to next month’s University Games in Kazan, a $600 million project that has not been blighted by any significant claims of corruption.

“There are projects like the Universiade where we are working calmly. We’ve got serious support there from the Audit Chamber,” he said.

Mutko did not refer to next year’s Winter Olympics in Sochi as an example. Russia’s first Winter Games, with a $50 billion budget, have already been marred by repeated claims of large-scale corruption. In one notable case, the former head of construction for the ski jump complex is under investigation for embezzlement and has fled to Germany.

Putin’s third term as president, which started last year, has been marked by a new focus on high-profile corruption cases against state officials and government efforts to increase Russia’s sporting success.