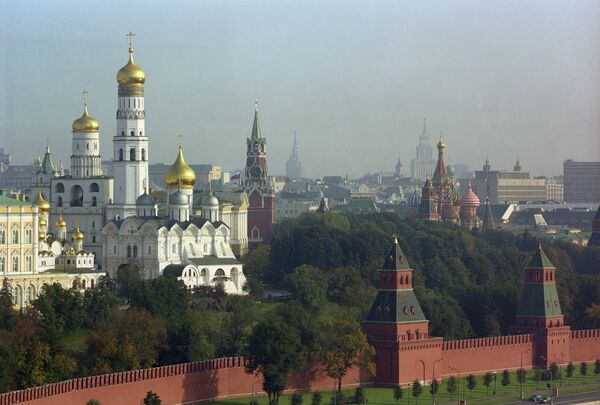 The thorny issue of history has always been dependent on the present in Russia, which has a long track record of harnessing its past for propaganda purposes. It is perhaps not surprising, then, that the Kremlin's plan to create a unified series of school history textbooks to replace the existing cornucopia of rival curricula has met with concern.

MOSCOW, June 20 (Alexey Eremenko, RIA Novosti) – At a debate about Russia's origins at the Imperial Academy of Sciences and Arts in St. Petersburg in 1749, one member threatened to beat up his opponents with a walking stick. But in the end, he got the short end of the stick himself, and was demoted after a rival complained to the tsarina that his theories demeaned Russian statehood.

The thorny issue of history has always been dependent on the present in Russia, which has a long track record of harnessing its past for propaganda purposes. It is perhaps not surprising, then, that the Kremlin's plan to create a unified series of school history textbooks to replace the existing cornucopia of rival curricula has met with concern.

Critics immediately voiced fears that the textbooks – a draft outline for which went up for public discussion this week – are designed to brainwash the nation on an Orwellian level last seen in Russia in the Soviet era.

However, pundits and professional historians said that, though the plan is in line with the recent tightening of ideological screws by the Kremlin, its scope and impact is likely to be limited.

“It’s actually very hard to tweak history, especially right in front of the public,” said Artemy Pushkarev, a researcher with the Institute of Russian History of the Russian Academy of Sciences, whose colleagues co-drafted the outline of the upcoming textbooks.

One History to Rule Them All

Russian authorities have long made a habit of editing the teaching of history – as well as history itself – to suit their ideological needs. School curricula in tsarist times were honed to advocate against revolutionary ideas, while dictator Josef Stalin himself commissioned a unified history textbook in 1935 extolling the Bolshevik Party.

Even as recently as the twilight years of the Soviet Union, professors risked losing their jobs for saying the Vikings had had a hand in the creation of the Russian state – a fact explicitly mentioned in Russian medieval chronicles, but glossed over in official Soviet textbooks as “unpatriotic.”

Everything changed with the demise of the Soviet Union. More than 100 textbooks on Russian history have been certified for use in high schools over the past two decades, putting wildly varying slants on the subject, from liberal to ultraconservative.

Perhaps due to this schizophrenic approach to the subject in schools, history was the high school subject most often flunked in Russia so far in this year’s national state exam. Exam papers have been graded for six subjects, with 8.9 percent of students failing the history section – more than in physics.

Sprucing Up the Soviets, Stalin Included

Russian President Vladimir Putin’s administration has extensively tapped the Soviet past to boost patriotism among the population, glossing over the darker aspects of the country’s recent history and extolling the achievements of the Soviet era, when Russia was an undisputed global superpower despite its authoritarian system. World War II – fought under Stalin – is the focus of particular attention, with anniversaries of key wartime events marked with more and more pomp and ceremony every year.

This approach has been reflected in the content of some of the textbooks. One infamous 2008 publication by two Moscow State University professors whitewashed Stalin as an “effective manager” whose repressions were a necessity to make the Soviet Union a superpower. While the authors had no known links to the Kremlin, the scandal was one of the factors behind calls for a consensus in teaching history.

The idea of launching a unified series of textbooks on Russian history came from Putin himself, who ordered their creation back in February.

The textbooks should be devoid of “inner contradictions and confusing interpretations” and “instill respect for all periods of our history,” the president said at the time.

Putin’s concern over perceptions of Russia’s history dates back to at least 2007, when he first blasted unspecified “hair-raising” history textbooks, though he gave no orders to rectify the situation at that time.

In 2009, the Kremlin created a commission against the “falsification of history” headed by Putin’s close ally Sergei Naryshkin, which failed to yield any visible results and was disbanded last year.

Naryshkin, now speaker of the lower house of parliament, went on to head a new working group of officials and professional historians that drafted 39 pages of guidelines on which topics, facts, dates and historical figures should feature in the new textbooks. The outline was presented to the public on Monday.

The guidelines have no glaring factual or conceptual errors, but it is too early to draw other conclusions over the pre-preliminary draft, which is bound to undergo sweeping revisions, said Valery Kerov, a history professor at the Peoples' Friendship University of Russia. Kerov was not a member of the working group, but has penned several history textbooks.

Stalin is explicitly denounced for the mass repressions of 1937-38 in the new textbook outline. Its authors said teachers would be allowed to offer students more than one interpretation of historical events – where sanctioned by the state-approved study program.

The public discussion on the draft will last until October, Education and Science Minister Dmitry Livanov said Monday.

Afterwards, the draft will be revised, and then a state tender launched to create a line of textbooks for grades 5 to 11 of Russia’s 11-grade school system.

Minister Livanov has denied the textbooks are meant to be propaganda. However, other people on the working group appear to think otherwise.

Culture Minister Vladimir Medinsky denounced current textbooks for “perverse interpretations” of history Monday, when he also said the new textbooks should argue against the “derivative nature” of Russian culture.

The minister has previously published a line of non-fiction books attacking critical “myths” about Russia. The works, by his own admission, were “similar to Soviet propaganda.”

Medinsky has been criticized over his approach, and professional historians have questioned the authenticity and merit of his own doctoral dissertation on history. But the allegations had no official repercussions and did not prevent Putin from making him a minister last year.

Political scientists interviewed by RIA Novosti agreed that the Kremlin had propaganda in mind when it pushed for the new textbooks.

“The authorities have realized that loyal citizens need to be raised starting from school age,” said Pavel Salin, a political scientist with the government-affiliated Financial University in Moscow.

But all pundits and historians interviewed for this article said a major ideologically colored revamp of Russian history, Soviet-style, looks unlikely for now.

The Kremlin never indicated to the academic community that it has any coherent view of Russian history it intends to impose, said Kerov of the Peoples' Friendship University of Russia.

A slightly improved image of Stalin and a more sympathetic view of the Soviet economic model than those currently in place are likely to be included in the new course, but no more than that, Salin said.

The Kremlin would prefer to avoid radical interpretations of the country’s history because it could trigger major public disputes that would only fuel public discontent, said Dmitry Oreshkin, an independent political analyst.

Attempts to put a spin on history are unlikely to win unquestioning support for the state anyway, he said.

“It would be like in the Soviet Union, where they devoted much bigger resources to teaching the ‘right’ kind of history, but it did not help,” Oreshkin said.