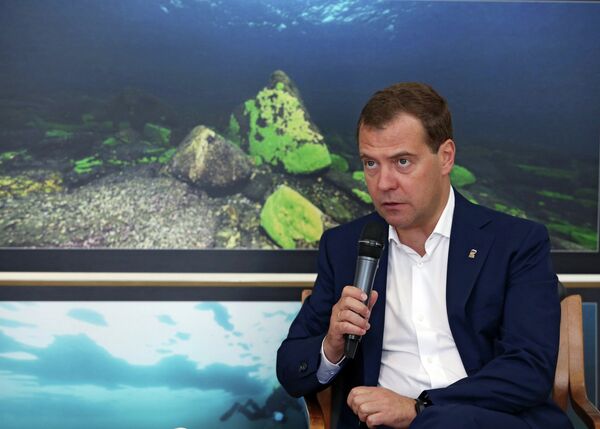 “All principled decisions on the issue have been made by the Russian government, and we will carry them out, there is no way back,” Medvedev told members of the ruling United Russia party in the Irkutsk Region in southeast Siberia.

The premier said he hoped the decisions would be backed by local officials. He said there were plans to spend 14 billion rubles ($437.4 million) on the plant’s closure. Overall expenditures on the area’s development could exceed some 40 billion rubles ($1.2 billion).

The Baikal paper mill has long been a source of controversy. Deputy Prime Minister Arkady Dvorkovich said in February 2013 that the Russian government has finally decided to close it down and gradually transfer output to other enterprises - a target that he said could be completed in several years.

The Baikal mill, opened in 1966, has long been a target for environmentalists, who claim it is doing untold damage to the world’s biggest and deepest freshwater lake. Baikal is a Unesco World Heritage Site which holds 20 percent of the planet's unfrozen fresh surface water.

The mill, the main employer for the nearby town of Baikalsk, was shut down in 2008 over environmental concerns. In 2010, then-Prime Minister Vladimir Putin authorized the plant, controlled by businessman Nikolai Makarov, to resume operations despite the fact that it was still causing pollution.

Last May, employees at the plant wrote to President Putin asking him to protect the mill from creditors, but bankruptcy procedures were launched at the mill in December 2012 following a court order.

State-run national development bank Vnesheconombank (VEB), the mill’s largest creditor, is trying to sort out the plant’s major problems related to its large debts, waste disposal and reemployment for its 2,000 strong workforce.

VEB Engineering head Dmitry Sheibe said in February 2013 stopping production would require at least two years, with liquidation of the mill’s accumulated waste taking around another from four to six years. He added there was no technology in the world to allow the production process at the mill to continue without doing environmental damage to Lake Baikal.

The Baikal pulp mill site has a huge recreational and tourism potential and proposals have already been made to use it for these purposes, he said.

A public campaign to close or convert the Baikal mill became one of the symbols of Glasnost, the "openness" policy proclaimed by Soviet leader Mikhail Gorbachev in the late 1980's.

The campaign involved the nation's leading statesmen and literary figures and forced the Soviet government to promise a halt to pulp production by 1993. The collapse of the Soviet Union in 1991 suspended implementation of that decision.