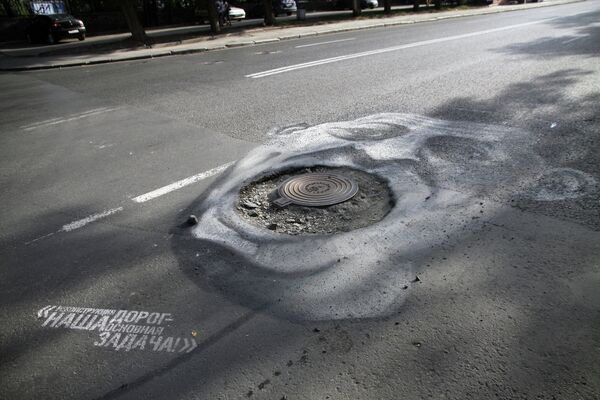 © RIA Novosti . Piotr Yasenev
/
Go to the mediabank
Subscribe
International
India
Africa
A crusading Russian news website won acclaim at Cannes on Tuesday for its campaign to shame local officials into fixing rutted roads by painting their portraits around potholes.

MOSCOW, June 18 (RIA Novosti) – A crusading Russian news website won acclaim at Cannes on Tuesday for its campaign to shame local officials into fixing rutted roads by painting their portraits around potholes.

The Ura.ru website, whose anti-corruption exposés have earned it a hard-hitting reputation in Russia, won four top prizes, including “best use of guerilla marketing,” at the Cannes Lions advertising and communications festival for its 2012 “Make the Politicians Work” campaign, documented by the Voskhod advertising agency.

The campaign, whose documentary video says led to a boost in road repairs in the Ural metropolis of Yekaterinburg, featured caricatures of the mayor, the governor and the vice mayor painted next to promises to fix the dilapidated roads.

News of the campaign quickly went viral across Russia, and, though the portraits were painted over, the potholes were fixed and the city increased road repair work fivefold over the following month, the video says. 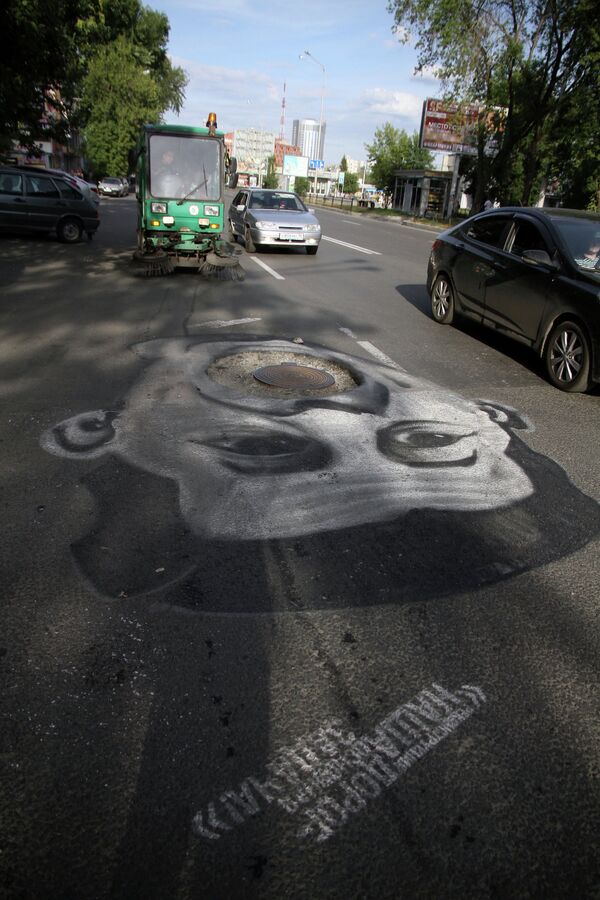 One of the caricatures on a street in Yekaterinburg, Russia’s fourth largest city.
© RIA Novosti . Piotr Yasenev
/
Go to the mediabank

Next week, however, the site’s chief editor at the time of that campaign is expected in court to face a string of criminal charges she says were fabricated by crooked officials seeking to silence Ura.ru.

Aksana Panova was charged in September with two counts of extortion under threat of defamation, as well as embezzlement and money laundering, allegations she says were made by subordinates of the Sverdlovsk regional governor to silence her organization after it came out with a raft of news reports on corruption and abuse of power in the region.

“The awards will unfortunately not help at all” at the trial, Panova told RIA Novosti on Tuesday. The first hearing is scheduled for June 25.

“Authorities have no sense of humor or self-irony,” but “now the whole world has seen their faces,” she added, referring to the three officials caricatured in the road campaign.

Neither the mayor, the governor nor the vice mayor was available for comment on Tuesday evening. Panova and much of her former team at Ura.ru have formed a new site, Znak.com, also dedicated to regional news.