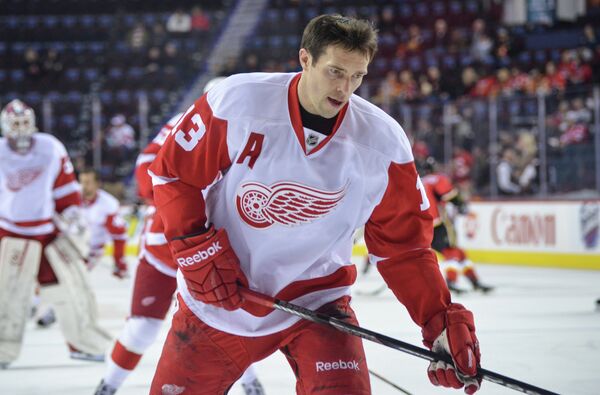 Russian center Pavel Datsyuk said Tuesday that he had signed a three-year contract extension to keep him with the NHL’s Detroit Red Wings until 2017.

MOSCOW, June 18 (R-Sport) - Russian center Pavel Datsyuk said Tuesday he has signed a three-year contract extension to keep him with the NHL’s Detroit Red Wings until 2017.
Datsyuk has been in Detroit since 2001, when he won the Stanley Cup in his rookie season, and will be 38 when the new deal ends.
“Signed 3 yr. extension. Detroit, glad to be here for 4 more yrs,” he wrote on Twitter.
Datsyuk’s remarks indicate his new contract will start when his current seven-year, $46.9 million contract finishes at the end of next season. Detroit cannot officially confirm the deal until July 5 due to NHL rules.
"It's absolutely the right decision and the only correct one," his agent Alexei Dementiev said. "In the modern NHL there are very few players who spend their whole career with one team, and Datsyuk has that chance."
"It's great that the Detroit management came to a compromise with the player and finalized a new contract with a year to go until the old one expires, and ruled out unnecessary talk."
The Yekaterinburg-born Datsyuk has scored 255 goals and 512 assists in 779 NHL games, all of them for the Red Wings, lifting the Stanley Cup in 2002 and 2008. He is also a four-time recipient of the Lady Byng Memorial Trophy, a prize that rewards playing skill and sportsmanship.
Datsyuk is likely to be a key member of the Russian attack at next year's Winter Olympics, as he continues his search to better the bronze medal he won with Russia in Salt Lake City in 2002. He was part of the Russian team that won last year's world championships.
The new deal will even help him at the Olympics in February, Dementiev said.
"Pavel himself will be much calmer playing at the Olympics when he's already got a three-year agreement in his pocket, and not four months until he enters the free agent market," he said.
Dementiev suggested Datsyuk could end his career in Russia after his new contract expires.
"Pavel has his house in Detroit any more or switch is real stress," he said. "With this contract, Datsyuk has secured himself the quiet life he's used to for a few more years."
"But if he'd then move to Russia, then it would just be out of respect for our hockey fans. At that time, the financial aspect won't be interesting to him."

Updates with with agent's reaction, background