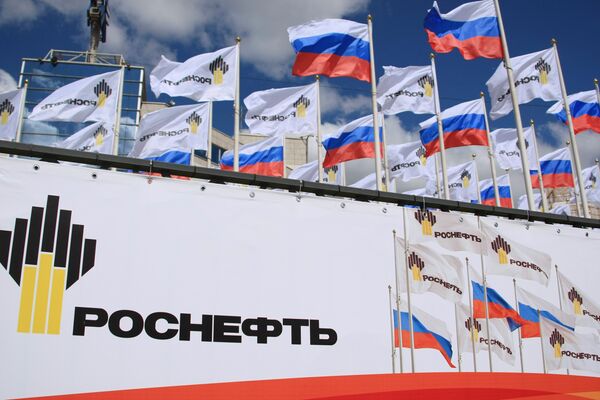 © RIA Novosti . Mikhail Fomichev
/
Go to the photo bank
Subscribe
National oil giant Rosneft may remain under state control under a new privatization plan prepared by the Russian government which would roll back its program to sell off some of the state's holdings in major companies, business daily Vedomosti reported on Monday.

MOSCOW, June 17 (RIA Novosti) – National oil giant Rosneft may remain under state control under a new privatization plan prepared by the Russian government which would roll back its program to sell off some of the state's holdings in major companies, business daily Vedomosti reported on Monday.

The new privatization program for 2014-2016, drawn up by Federal Property Agency Rosimushchestvo, sets out a more hesitant approach by the government to parting with raw material assets.

The new plan succeeds the current privatization program to 2013, under which the government planned to sell all its stakes in 12 large state companies and cut its holdings in seven other businesses. So far, the government has only managed to reduce its shareholding in VTB Bank, sell a 7.6 percent stake in Sberbank and a controlling interest in the United Grain Company.

The new plan proposes canceling or delaying some of the previously slated privatizations. Under the current program, the government intended to privatize Rosneft by 2016 but the new plan proposes selling only 19.5 percent of the oil giant, keeping it under state control.

Rosneft CEO Igor Sechin, who was previously vice-premier in the Russian government for the fuel and energy sector, warned then-Prime Minister Vladimir Putin in December 2011 that if privatized, Rosneft would be unable to work on the Russian continental shelf and would also pay less tax revenue to the budget, according to Vedomosti.

Sechin maintained his attitude to privatization when he became head of Rosneft in 2012. He said in May 2013 that the government should first bolster crude output and only then offer the company for sale.

The government’s plans for the privatization of state-owned banks may also be reviewed. The government previously planned to sell off its stake in VTB, Russia’s second largest bank by assets, by 2016. The new plan proposes keeping control of the bank.