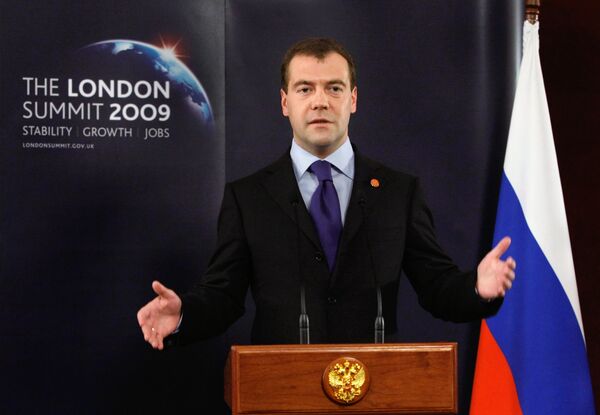 © RIA Novosti . Vladimir Rodionov
Subscribe
International
India
Africa
There would have been few technical difficulties for US spies wanting to listen to the secret communications of then-Russian President Dmitry Medvedev during the 2009 G20 summit in London, a former head of Russia's security services said Monday.

MOSCOW, June 17 (RIA Novosti) – There would have been few technical difficulties for US spies wanting to listen to the secret communications of then-Russian President Dmitry Medvedev during the 2009 G20 summit in London, a former head of Russia's security services said Monday.

A report detailing the surveillance of Medvedev by British and US intelligence organizations was published four months after the summit by US spy organization the National Security Agency, or NSA, Britain’s Guardian newspaper reported Sunday, citing a copy of the report.

“From a technical point of view, monitoring the conversations of people in your own country is not at all complicated,” said Nikolai Kovalyov, a member of the State Duma’s Security Committee and a former head of the Federal Security Service, or FSB.

“It’s another matter that intelligence services are forbidden from doing such things to avoid a diplomatic and international scandal, and they usually don’t do them.”

Medvedev met with US President Barack Obama for the first time during the 2009 G20 summit. The subsequent report produced by the NSA about the contents of Medvedev’s conversations was subsequently shared with the British, Australian, Canadian and New Zealand governments, according to the Guardian.

Another senior Russian official said that the spying revelations could damage Russia-US ties.

“In 2009 the Russian-American ‘reset’ was announced, and the American secret service was simultaneously listening in on the phone calls of Dmitry Medvedev,” said Igor Morozov, a member of the International Affairs Committee of the Federation Council, the upper house of the Russian parliament.

“In this situation how can we trust the current announcements of US President Barack Obama, who is talking about a new ‘reset’?”

Alexei Pushkov, head of the International Affairs Committee of the State Duma, the lower house of the Russian parliament, described the alleged surveillance on Medvedev as a “scandal” and “sheer deception” on his Twitter account Monday.

But not all officials were surprised by the Guardian’s report.

“There is no need to dramatize the situation,” said Viktor Ozerov, chairman of the Federation Council’s Defense and Security Committee. “Intelligence services exist not just to spy on private individuals, but also on heads of state.”

President Vladimir Putin is due to participate in the G8 summit hosted by the United Kingdom on the shores of Lough Erne in Northern Ireland on Monday and Tuesday.