Russian Journalist To Be Deported From Turkey 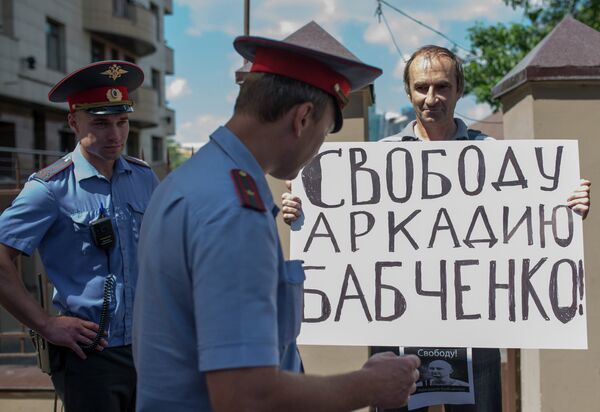 Russian reporter Arkady Babchenko, allegedly detained in Istanbul by police and beaten up on Friday, will be deported from Turkey, the Russian Consulate in Istanbul said Saturday.

Updated with quotes from consul and news of deportation

ANKARA, June 15 (RIA Novosti) – Russian reporter Arkady Babchenko, allegedly detained in Istanbul by police and beaten up on Friday, will be deported from Turkey, the Russian Consulate in Istanbul said Saturday.

“Arkady Babchenko will fly out tonight on an Aeroflot flight to Moscow,” said a representative of the Russian Consulate in Istanbul.
Babchenko, who was covering the ongoing protests in Turkey for Russian newspaper Novaya Gazeta, spent the night in a police cell after being detained near Taksim Square in Istanbul late Friday.

The reporter, known for his harrowing memoir of fighting in Chechnya in the 1990s “One Soldier’s War,” was released from a Turkish court Saturday without charge, but was then transferred to a holding center by police, according to Nikolai Kuzovenko, the Russian consul in Istanbul.

On Saturday, the reporter told Ekho Moskvy radio station that he had been beaten up by police. “I can hardly move my left leg, and can only partially move my right one. I can’t stand up,” he said.

Russian media reported on Saturday that he had been detained for recording video footage without permission.

Novaya Gazeta, an opposition-minded paper, said in a statement on its website earlier that Babchenko had been detained by a group of people in civilian clothes when taking photos of police cars.

“When I tried to wrench myself from their grasp, they dragged me to a back alley and started beating me up,” the paper quoted Babchenko as saying.

At least five people have died and thousands have been injured in anti-government protests in Turkey that began two weeks ago, sparked by government plans to redevelop a park in central Istanbul.