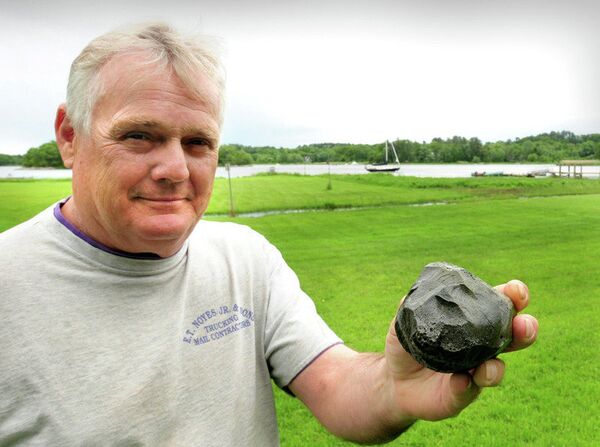 A Massachusetts man has learned that a rock he found on a riverbank six years ago is likely ballast that fell to earth from Russia’s now-defunct Mir space station or a space cargo vehicle that serviced it, local media reported this week.

WASHINGTON, June 14 (RIA Novosti) – A Massachusetts man has learned that a rock he found on a riverbank six years ago is likely ballast that fell to earth from Russia’s now-defunct Mir space station or a space cargo vehicle that serviced it, local media reported this week.

“There was a big flat rock and this thing was just sitting there, and with the dynamics of the river there’s no way that could’ve happened, unless…,” Phil Green told The Daily News of Newburyport, whistling and making a falling gesture with his hand to mimic the space junk’s descent.

Green, an elementary school custodian in the town of Amesbury, Massachusetts, told the newspaper that he found the greenish rock on the banks of the Merrick River near his home while searching for arrowheads six years ago.

The metal detector he was using did not register the presence of metal in the rock, which was peppered with tiny pores, and after pondering its provenance, he simply let it sit around for five years on his property, he told the Daily News.

“I didn’t really think much of it, and then a fellow came over, saw it and said that’s a meteor,” Green told the newspaper.

Green’s sister-in-law took the initiative last year and sent it to NASA for analysis, and several weeks ago he received a package from the US space agency along with a letter from a NASA engineer George Leussis saying it was likely ballast from the Soviet or Russian space program, the Daily News said.

“The material shows a composition similar to that used as ballast by the Soviet space program starting in the mid-1980s,” Leussis wrote, the newspaper reported. “This places its most likely origin as Mir, or one of the Progress-M class Russian resupply vehicles, that had undergone a TPS failure.”

The Mir space station operated from 1983 to 1998, after which it was sunk in the Pacific Ocean in a so-called “spacecraft cemetery” in March 2001.

The rock’s curious color and texture is the result of the extreme heat and pressure it was subjected to upon reentry into the earth’s atmosphere from low orbit, the Daily News cited the NASA letter as saying.

The US space agency confirmed that the rock is not radioactive and is safe to handle, the newspaper said.