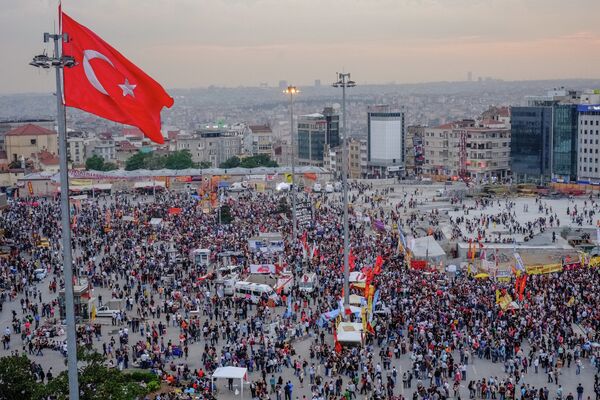 Italy’s foreign minister has rejected comparisons between the current anti-government protests in Turkey and the Arab Spring uprisings that toppled governments in Egypt, Tunisia and Libya.

ROME, June 12 (RIA Novosti) – Italy’s foreign minister has rejected comparisons between the current anti-government protests in Turkey and the Arab Spring uprisings that toppled governments in Egypt, Tunisia and Libya.

"Taksim Square [in Istanbul] and not Tahrir Square," Emma Bonino said referring to the events in Egypt that ousted President Hosni Mubarak. "This is not a Turkish spring," she said adding that the way the Turkish government deals with the protests is a “maturity exam” for the country’s prime minister.

She said the Turkish riots are reminiscent of the Occupy Wall Street movement that began in the United States in 2011 in protest against what it claims is social and economic inequality.

The Italian foreign minister stressed that Rome "wants a fully democratic Turkey" and the country’s possible accession to the EU could have a positive effect. Ankara began the EU accession talks in 2005, but progress has stalled.

The foreign minister has also condemned the Turkish police's disproportionate use of force when dispersing the protesters. The EU foreign policy chief Catherine Ashton expressed “deep concern” over the violence last week.

Turkey’s TV watchdog on Wednesday fined a number of channels for "harming the physical, moral and mental development of children and young people" by broadcasting coverage of the Gezi Park protests, the Hurriyet Daily News reported.

The civil unrest in major Turkish cities was sparked by the government’s plans to demolish Gezi Park in central Istanbul and replace it with rebuilt Ottoman barracks and a shopping mall.

As the number of people protesting the mooted demolition of the park gradually increased, police moved in to disperse the crowds by using tear gas. Outraged protesters reportedly responded by hurling stones and bottles at police. Over 3,000 people have been injured and at least three people have died in demonstrations across the country in the nearly two weeks.