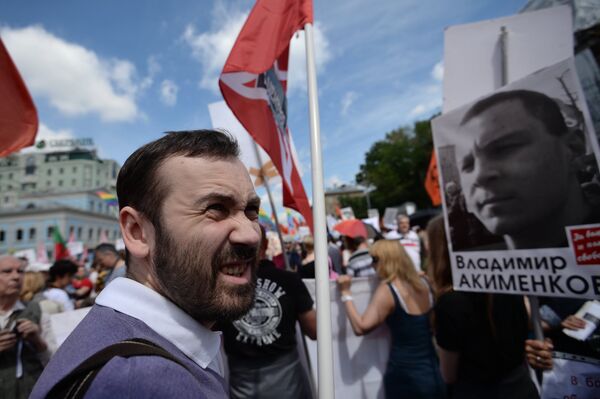 Carrying placards with pictures of alleged political prisoners, including protestors accused of participating in mass riots, oligarch Mikhail Khodorkovsky and members of punk band Pussy Riot, participants in the “For Your and Our Freedom” march walked through downtown Moscow in bright sunshine to Bolotnaya Square.

The march passed off largely peacefully, but its route re-traced that of a demonstration on May 6, 2012, which ended in a bloody melee and 650 detentions.

Twelve people are currently on trial, and another 16 under investigation, in relation to those skirmishes between riot police and protestors, which police say were instigated by radical activists. Opposition leaders maintain that the police provoked the violence.

“We want to protect our comrades from Bolotnaya Square from the illegal actions of the authorities,” said Viktor Ruktsov, 78, who was carrying a large poster of Ilya Gushchin, an activist arrested in February as a part of the so-called “Bolotnaya case.”

“Any of us could be there [in prison] at any moment,” he added.

City police said about 6,000 protestors turned up to the rally, while activists put the figure nearer 30,000. Last year’s May 6 rally attracted 8,000 people, according to police, or up to 100,000, according to some independent estimates.

“Society is changing,” Gudkov told RIA Novosti, “if the authorities do not succeed in changing then the same thing will happen to them as has happened in Arab countries.”

Nine demonstrators were detained, according to the human rights website Ovdinfo.org, for allegedly unveiling banners belonging to the socialist Left Front group, which was banned by Moscow prosecutors in April.

Sergei Udaltsov, the leader of the group and one of Putin’s most prominent critics, is currently under house arrest pending an investigation into his role during last year’s violence on Bolotnaya Sqaure.

Ahead of the rally prosecutors forbade protesters from carrying “cages” with photos of judges and investigators involved in the ongoing trial, Navalny wrote on his blog. Police blocked both Bolshoi Kammeny Bridge and Bolshoi Moskovoretsky Bridge, which lead to the Kremlin, with lines of riot police, water trucks and bulldozers.

The issue of alleged political prisoners was not the only grievance aired. Participants also shouted chants, familiar from previous opposition rallies, of “Putin, thief!” “We will come again!” and “Putin, skis, Magadan!” - Magadan is a city in Russia’s Far East where prisoners sentenced to hard labor were sent to under the Soviet Union.

Wednesday’s protest, referred to by some as the "March Against the Executioners," is the latest in a long series of opposition demonstrations first triggered by allegations of widespread fraud during Russian parliamentary elections 18 months ago. Attendance has fallen steadily since early 2012, but organizers have retained their ability to bring thousands onto the streets.

Many protestors said that they would continue to take part, and dismissed claims that such rallies fail to yield results. “They change the public agenda and people’s mentality,” said Anna Shabakhova, 27, a manager. “Street protests should continue.”

Banners carried by protestors criticized the US adoption ban passed last year, the tightening of regulations affecting NGOs, declining standards in the education system and “anti-gay” legislation, approved Tuesday by the State Duma, which imposes harsh penalties for the “promotion” of homosexuality.

Irina Chekhovskaya, 38, a secretary at Moscow State University, spoke of a “total moral degradation” that has occurred under the rule of Putin.

“When you sit in your apartment you think you are alone… but you come to the rallies and you see other people and it gives you the strength to live,” she said. “I want to live in a free country.”

Putin has been accused of orchestrating a crackdown against the opposition since he was inaugurated for a third term as president last May. As well as the case against those involved in the violence with police, criminal cases have been opened against prominent opposition figures Navalny and Udaltsov, who both face the possibility of long jail sentences.